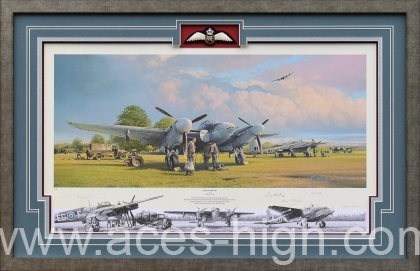 A tribute one of the foremost ground-attack aircraft ever to take to the skies!

The dark days following the fall of France had seen a triumphant German advance in the west stemmed and ultimately halted by the RAF in the Battle of Britain. As Hitler turned his eyes and ambitions east towards Russia, military planners in Britain soon began to plan for the day when an Allied cross-Channel invasion would herald their return to France and mainland Europe. In June 1943 a new air force was established to provide and co- ordinate air support to the Army in preparation for that invasion, for the land operations that would follow, and the inevitable ground offensives by the British and Canadian Armies as they drove west in the battles to defeat Germany.

Known as the 2nd Tactical Air Force (2TAF), the new composite air force was a powerful mix of Fighter Command aircraft that could be used for ground attack and to achieve air superiority, of light strike medium bombers drawn from Bomber Command, and of army support and photo-reconnaissance squadrons. All were to be controlled by a single air commander who, in a joint army-air headquarters, would decide where best to deploy these resources ‘in order to achieve success for the land operations’.

We’re delighted to offer ground-breaking Legacy Remarques on this release. Robert’s talented son, Richard Taylor, has created a specially hand-drawn Remarque in the lower border of the print, including a fantastic piece of framing to make sure the piece stays conserved and in condition.

Each Legacy Remarque has been signed by both Robert Taylor and Richard Taylor, and carries the original autographs of three highly-regarded veterans who flew Mosquitos during WWII: