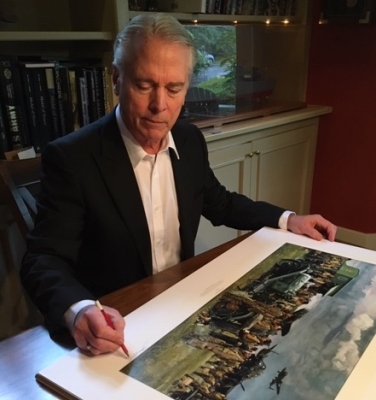 James Dietz is an award-winning artist whose unique approach to the depiction of aviation, automobiles, and military subjects has earned him countless fans around the world. He often portrays a human involvement in his paintings to emphasize the interaction between man and machine.

Dietz began his career as an illustrator in Los Angeles following graduation from the Art Center College of Design in 1969. Then, after roughly a decade in southern California, Dietz moved to Seattle, where he continues to live and work to this day. His clients have included Boeing, Bell Hellicopter, FedEx, Allison, Cessna, flying tigers, the Indianapolis 500, BMW, the National Guard, and numerous branches of the U.S. Army.

“The people, settings, and costumes are what make aviation history exciting and romantic to me.”