HOME IS THE HUNTER 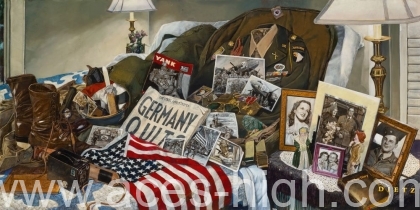 On September 1, 1939, Hitler ordered German forces to invade Poland. Two days later France and Britain declared war on Germany. Sixteen months later, on December 7, 1941 -- a date which will live in infamy -- the United States of America was suddenly and deliberately attacked by naval and air forces of the Empire of Japan.

Every branch of service in the United States military would answer the call to the nation’ s defense. The United States, along with 45 other Allied nations, would dress their sons and daughters for the battle to halt the Axis expansion and defeat tyranny.

Across nearly every continent and ocean, nations fought for the freedom of the world. The soil and waters of the earth became the final resting place for an estimated 75,000,000 people, both military and civilian.

Naval ships forever slipped into the dark waters of the Pacific Ocean at Pearl Harbor, Iron Bottom Sound, Leyte Gulf and the Battle of Midway. The depths of the Atlantic became the eternal cradle of Merchant ships, their loyal escorts and their submarines pursuers.

The beaches of Normandy, the sands of El Alamein; the dense woods of Hurtgen Forest along Bastogne and Ardennes; the hills and rivers of Imphal and Kohima, the grassy steppes of Stalingrad, and the jungles of the King Solomon Islands all bear similar scars forever tinged with the blood of the world’ s total war.

This Publisher's Proof has been signed by artist Jim Dietz.