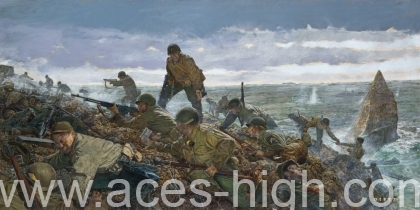 US Second Rangers assault German position on Pointe du Hoc on D-Day the Sixth of June 1944.

Pointe du Hoc, a prominent position along the coast of Normandy, was a focal point of the amphibious assault by US forces during the early morning hours of D-Day, 6 June 1944. The cliff top (sometimes referred to as Pointe du Hoe) is located between Utah and Omaha Beaches and sits atop overhanging cliffs up to 100 feet in height. The careful and thorough planning of the Normandy invasion determined that several key missions would require painstakingly accurate execution in order for the invasion to go as planned, and one of those missions was the capture of Pointe du Hoc. As such, Allied planners named Pointe du Hoc one of the most dangerous German defensive positions on the Norman coast

On D-Day, Lieutenant Colonel Rudder and his force from the 2d Ranger Battalion, made up of 225 soldiers, along with LTC Max Schneider and the 5th Ranger Battalion in support, would carry out the mission to scale these cliffs before dawn on that fateful day and neutralize enemy positions atop Pointe du Hoc. Rudder, who had commanded the 2d

Ranger Battalion since its activation on 1 April 1943 at Camp Forrest, Tennessee, was largely responsible for developing the plan for his Rangers on D-Day. The plan called for the use of a force consisting of three separate elements in the form of Force A, B, and C. Force A consisted of Companies D, E, and F, 2d Ranger Battalion, and would land just below Point du Hoc. The assault teams would come ashore in a group of nine British-crewed Landing Craft Assault (LCA) boats carrying twenty-two men each. LCAs 668 and 858 would carry  Company D. LCAs 861, 862, 888, and 722 would transport Company E and Rudder’s command element, while Company F would occupy LCAs 887, 884, and 883. In addition to the LCAs, four DUKW amphibious vehicles equipped with extension ladders, acquired from the London Fire Department, would accompany Force A.