FURY FROM THE SKY 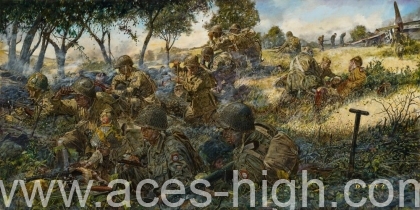 The 508th Parachute Infantry Regiment of the famed 82d Airborne Division jumped into Normandy, France, as part of the invasion on D Day, 6 June 1944. Among these 508th Paratroopers was Corporal Rock Merritt, an original Red Devil who had been with the 508th PIR since activation in 1942 at Camp Blanding, Florida and who eventually served as the 1st Battalion 508th PIR Command Sergeant Major. In Normandy, Rock would receive the first of many combat orders: “Corporal, take two men with you and go knock out that machine gun.” Combat actions such as this characterized the instrumental role little groups of Paratroopers played that night and in the coming days across the Cotentin Peninsula as the 508th PIR fought valiantly to secure their airborne objectives. The Red Devils demonstrated their audacity and lethality under the most arduous conditions against a determined enemy. For their actions at Normandy, the 508th PIR were awarded the Presidential Unit Citation:

“The 508th Parachute Infantry Regiment is cited for outstanding performance of duty in action against the enemy between 6 and 9 June 1944, during the invasion of France. The regiment landed by parachute shortly after 0200, 6 June 1944, on the Cotentin Peninsula east and west of the Merderet River and north of the Douve River, France. Intense antiaircraft and machine gun fire was directed against the approaching planes and parachutist drops. Enemy mobile antiairborne landing groups immediately engaged assembled elements of the regiment and reinforced their opposition with heavily supported reserve units. Elements of the regiment seized Hill 30, in the wedge between the Merderet and Douve Rivers, and fought vastly superior enemy forces for 3 days. From this position they continually threatened German units moving in from the west as well as the enemy forces opposing the crossing of our troops at the bridges over the Merderet near La Fiere and Chef Du Pont. They likewise denied the enemy opportunity to throw reinforcements to the east where they could oppose the beach landings. The troops on Hill 30 finally broke through to join the airborne troops at the bridgehead west of La Fiere on 9 June 1944. They had repelled continuous attacks from infantry, tanks, mortars, and artillery for more than 60 hours without resupply. Other elements of the 508th Parachute Infantry fought courageously in the bitter fighting west of the Merderet River and in winning the bridgeheads across that river at La Fiere and Chef Du Pont. The regiment secured its objectives through heroic determination and initiative. Every member performed his duties with exemplary aggressiveness and superior skill. The courage and devotion to duty shown by members of the 508th Parachute Infantry are worthy of emulation and reflect the highest traditions of the Army of the United States.”

This Publisher's Proof has been signed by artist James Dietz.