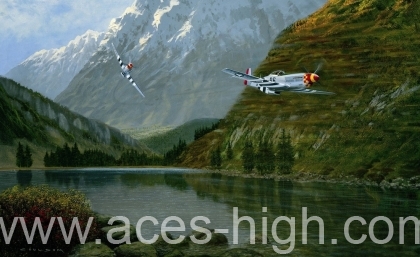 Fighter pilots are, by nature, free spirits. Give them a fast aeroplane to play with and they will. There were never two freer spirits than ‘Bud’ Anderson and ‘Chuck’ Yeager of the 357th Fighter Group.

Both of these P-51 Mustang pilots were always itching to be where the action was and setting off for what was the last mission of their second tour of combat duty with the Eighth Air Force, they wanted to make it memorable. With the war drawing to a close and little chance of contact with the Luftwaffe, the two pilots left the formation and went sight-seeing!

In a majestic painting which combines his love of landscape with aviation, Gerald Coulson depicts Bud Anderson and Chuck Yeager racing their Mustangs at low level through an Alpine landscape, oblivious to the record-breaking air battle involving the rest of the 357th pilots that they were missing.

Joining artist Gerald Coulson, each print in the entire edition is signed by:

Every print in this edition is additionally signed by Colonel Chuck Yeager, together with three P51 pilots who flew in Europe with the 357th Fighter Group. There are a total of FIVE signatures in this edition.