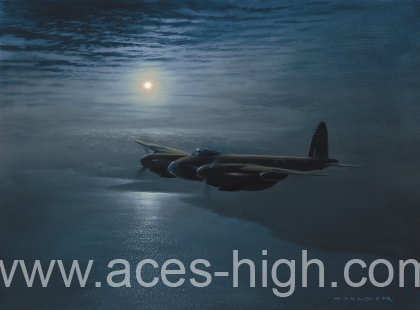 With Britain under siege at the beginning of the war, and a vast shortage of metals and skilled labour to work it, inspirational design led to the construction of one of the most remarkable warplanes ever built. Constructed almost entirely of laminated wood, bonded with glue, the complex construction was undertaken by craftsmen hitherto trained in the skill of building furniture! The result was the sensational de Havilland Mosquito. Powered by its two huge Merlin engines, its sleek, shark-like design made it the fastest and most versatile aircraft of the war.

To commemorate this much-loved and incomparable aircraft, Gerald Coulson’s evocative painting depicts a Mosquito B Mk. XVI, a high altitude bomber version, on operations deep over occupied Europe. In this guise the Mosquito was by far the fastest piston-engine bomber of World War II, and also the only light bomber capable of delivering the devastating 4,000lb ‘block-buster’ bomb.

Each individually numbered print is signed by THREE Mosquito crew members who flew with the RAF’s elite Pathfinder Force during World War II.