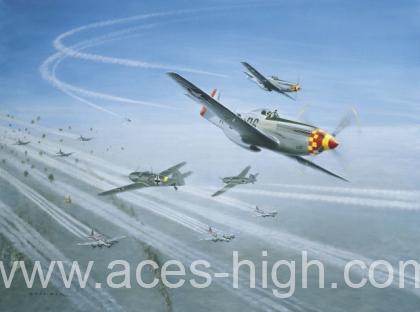 Every day when weather permitted, the bomber crews of the USAAF Eighth Air Force flew missions deep into Germany and other destinations under the rule of Nazi Germany. And every day they knew the enemy fighters were waiting for them. Only the fighter escorts stood between the bombers and potential decimation.

Big Brothers and Little Friends – this was the enduring bond between the bomber crews and fighter pilots of the USAAF Eighth Air Force in their prolonged and hotly contested air war against Hitler’s Nazi Germany, 1942-1945.

Renowned Aviation Artist Gerald Coulson has reconstructed the deadly war game being played out in the icy, thin stratosphere high above a hostile territory, February 1944.

Every print in the Aces Edition is signed by two additional top P-51 fighter Aces:

An exclusive edition of just 100 prints authenticated by two of the Luftwaffe’s top Aces. Published with a unique matching-numbered colour companion print ‘RETURN TO FOWLMERE’ (signed by Brigadier General Robin Olds) featuring a P51D of the 339th Fighter Group returning to base after escorting a long daylight raid by B17s over Germany, signed by:

Each Remarque includes everything above, and has been further signed by: