WHERE THE EAGLES GATHERED 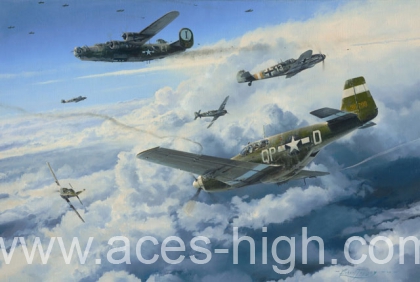 On 5 March 1944 the B-24 bombers of the 448th Bomb Group took off from England, their mission - to destroy the Luftwaffe facilities at Limoges aerodrome in western France. But waiting for them were the Bf-109s of JG2, ready to rip into the attacking force at the first opportunity. Luckily for the bomber crews they had one of the finest fighter escorts in the Mighty Eighth, Don Blakeslee’s 4th Fighter Group – 'The Eagles'. As a straggling B-24 comes under attack and its inner starboard engine starts to trail smoke, Steve Pisanos, one of the Fourth’s most deadly Aces, and fellow P-51B pilots quickly arrive on the scene to break up the attack. The Liberator now has a chance to get home.

Each book is individually numbered and hand signed by the artist. Each print is personally signed by Steve Pisano's and a Luftwaffe Fighter pilot that fought during this campaign.

With just TEN copies issued with each of the special editions, Robert Taylor’s magnificent pencil remarque will be completed on a separate folio sheet of paper which can either be inserted loosely within the book itself, or, if you wish, available to be framed and displayed as a separate item in its own right.

Collectors can choose their Robert Taylor pencil drawing remarque - the only authentic remarque issued with Volume VI - from either an RAF, USAAF, or Luftwaffe subject. Depending on the subject chosen, the drawing will come separately signed, not only by the artist Robert Taylor, but by one of the following Aces:

Specially placed in the front of each of the TEN remarque edition books will be a remarkable bookplate containing the original signatures of FIFTEEN of World War Two’s most famous and distinguished aviators.