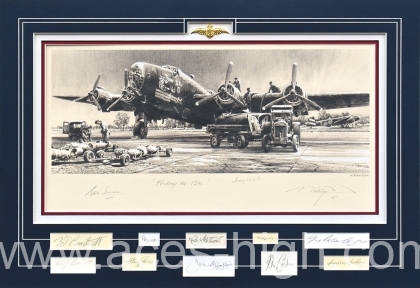 A TRIBUTE TO THE HANDLEY-PAGE HALIFAX

On the night of 11 / 12 March 1941, Halifax bombers went into action for the first time when aircraft from 35 Squadron bombed the docks at Le Havre. The following night the squadron took part in a raid on Hamburg, with the Halifax becoming the first of the four- engine ‘heavies’ to bomb Germany, nearly a year before its illustrious counterpart, the Lancaster, entered the fray.

Equipping numerous units that subsequently included RAF, Canadian, Australian, Free French and Polish squadrons, from that night in March 1941 until the cessation of hostilities, this formidable, hard-working aircraft would become a core component of Bomber Command’s night bombing campaign against the Third Reich. Despite being eventually overshadowed by the Lancaster, Halifaxes would nevertheless deliver more than a quarter of all the bombs dropped on Germany by the Royal Air Force.

Yet, unlike the Lancaster which obtained its legendary status solely as a bomber, the Halifax could operate in numerous other front-line roles: it was a superb glider tug, seeing action during the invasions of Sicily and Normandy, at Arnhem and during the Rhine crossings. It shared with Short’s Stirling the unique ability of towing the huge heavy- lift, tank-carrying Hamilcar, the Allies’ largest assault glider of the war. It was also used for covert SOE operations – the only aircraft with a long enough range to carry agents, weapons and equipment to eastern Europe – as well as carrying out mine-laying sorties and long-range meteorological, anti-submarine and shipping patrols with Coastal Command, whose Halifaxes sunk no less than nine U-boats.

It comes as no surprise, therefore, that the Halifax taking centre stage in Robert Taylor’s masterwork drawing is one of the most famous Halifaxes ever built, an aircraft that successfully completed 128 operations with 158 Squadron, and survived. That Halifax, LV907, is better known as ‘Friday the 13th’. In tribute to the Halifax and the valiant airmen who flew them during World War II, only 25 copies of this high quality giclée fine art print are available worldwide through the Military Gallery, Robert’s exclusive publisher. Each copy has been signed, numbered and hand-titled by Robert, personally autographed by Second World War Halifax aircrew, and issued mounted to full conservation standards. A completely unique TWELVE signature collector’s piece to be cherished!

But that’s not all – to complete the portfolio, each copy is issued with a special Certificate of Authenticity which doubles as a special information booklet. This includes biographies of all featured signatures, significant crew lists of ‘Friday the 13th’ and a full list of her 128 operations. Also enclosed in the presentation sleeve is an officially licensed faithful reproduction of a ‘Halifax Pilot & Flight Engineer Notes’ as issued by the Air Ministry during the war.

Each print is matted to full conservation standards to include a museum-quality reproduction RAF sweetheart brevet and the TWELVE original autographs of Halifax Aircrew and Pilots:

Over a number of years we’ve been fortunate to know many veterans who flew Halifax bombers during the war and have managed to collect a number of original autographs that would be perfect for including in the conservation matting.

Only FOUR copies are available, these special 25 signature collector’s pieces won't be around for long!