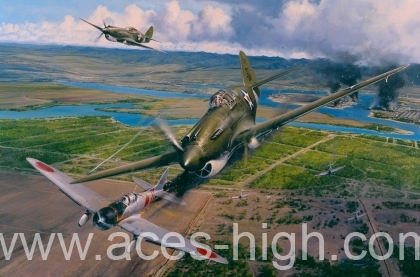 The very first air combat fought by American pilots following the surprise attack upon Pearl Harbor. In less than one hour America struck back in a war that was to end in total victory. As the assault mounted on the Pacific Fleet in Pearl Harbor, simultaneously the air base at Wheeler Field came under heavy attack.

Two young USAAF pilots, Kenneth Taylor and George Walsh, quickly got their P-40 Tomahawks airborne. Winging southwards towards Ewa Field they ripped into a dozen or more enemy planes attacking the marine field. Diving into the formation they each downed 'Val' fighter-bombers. Robert Taylor's painting shows Ken Taylor in his P-40 tomahawk, with George Walsh in close company, bringing down his second enemy aircraft on December 7, 1941, an Aichi D-3Al ' Val' dive-bomber. In the background palls of smoke rise from Hangar 6 housing the naval float planes, and the up-turned battleship Oaklahoma.

Each print in this edition has been personally signed by: