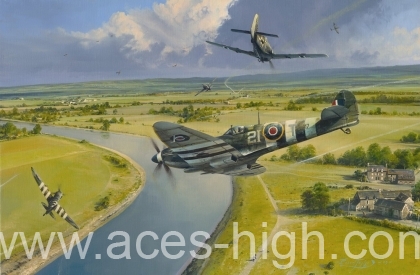 When Johnnie Johnson led the Mk IX Spitfires of his 144 Canadian Wing to temporary airstrip B.3 near the village of St Croix sur Mer, a few miles inland from the Normandy beach head, they were making history. As they landed on the hastily constructed Summerfield mesh track¬ing runway on D-Day plus 9, they became the first Allied air force unit to be based in former occupied Europe, and the first to operate in France after D-Day. Mk IX Spitfires of 443 Squadron RCAF, based at St Croix sur Mer tangle with a group of Fw190s whom they had encountered on a fighter sweep near Alençon, in southern Normandy on 23 June 1944. During the melée that followed, their Squadron Leader, Wally McLeod, quickly destroyed two Fw190s, whilst another Fw190 was badly damaged.

This outstanding print is issued with a matching numbered special edition copy of Air Combat Paintings Volume VI - with the RAF cover and presented in a gold embossed slip case.

The companion release WHERE EAGLES GATHERED is also available in matching editions.

Each print is personally signed by an RAF and Luftwaffe combat pilot that flew during the Normandy Invasions:

With just TEN copies issued with each of the special editions, Robert Taylor’s magnificent pencil remarque will be completed on a separate folio sheet of paper which can either be inserted loosely within the book itself, or, if you wish, available to be framed and displayed as a separate item in its own right

Specially placed in the front of each of the TEN remarque edition books will be a remarkable bookplate containing the original signatures of FIFTEEN of World War Two’s most famous and distinguished aviators. Illustrious veterans whose names include Erich Hartmann, the highest scoring Ace in history; Hub Zemke; and Victoria Cross holder Bill Reid to name but a few.

Collectors can choose their Robert Taylor pencil drawing remarque - the only authentic remarque issued with Volume VI - from either an RAF, USAAF, or Luftwaffe subject. Depending on the subject chosen, the drawing will come separately signed, not only by the artist Robert Taylor, but by one of the following Aces: