Home > Artists > Simon Smith > WE TREATED THEM ALL THE SAME

WE TREATED THEM ALL THE SAME 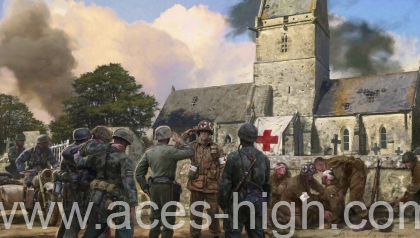 These simple words, carved into a stone memorial outside the ancient church at Angoville-au-Plain, a small hamlet six miles south-west of Utah Beach in Normandy, recall the heroic actions that took place.

In the early hours of 6 June 1944 two medics from the 101st Airborne – Kenneth Moore and Robert Wright – arrived to find themselves in the middle of a confused and savage firefight. Undeterred by the fighting around them the two men immediately set up a field dressing-station in the little village church to treat the growing numbers of wounded.

In an act of true humanity within the brutality of war, the two medics insisted on treating every wounded soldier brought here equally, regardless of the uniform they wore.

There was, however, one simple rule. No guns were to be brought inside the church. When two German paratroopers burst through the doors, machine-guns raised, the medics simply stared them straight in the eye and nodded down to the young German soldier they were treating. The two enemy paratroopers immediately understood. Both saluted and withdrew.

By the time the fighting was over, all but three of the 80 wounded had survived.

Simon Smith has brought this moving and act of heroism to life in his new edition. Every print is signed by ‘Art’ Petersen, a veteran of the fire-fight at Angoville. The Collector’s Edition is, however, even more special: additionally signed by D-Day 101st airborne medic ‘Doc’ Blaney, each print is also personally signed by KENNETH MOORE, creating one of the most moving and historic editions.

This is a truly unique and memorable edition that will surely inspire enthusiasts and military art collectors alike, an piece to be treasured as a reminder of one of the most inspirational stories to come out of D-Day and the battle for Normandy.

Each print is personally signed by the artist Simon Smith and:

These and historically important THREE signature editions are additionally signed by Kenneth Moore – one of the two 101st medics who set up the aid station at Angoville-au-Plain – and ‘Doc’ Blaney, another distinguished 101st medic who fought on D-Day:

With all the signatures of the Collectors’ Edition, each copy of the Remarque Edition will have one of Simon Smith’s classic pencil remarques delicately hand drawn in the lower margin of the print.

This outstanding EIGHT signature edition is a special tribute to all those who jumped with the 506th PIR, 101st Airborne Division on D-Day. With all three signatures from the Collectors’ Edition, each print is issued with a unique original pencil drawing specially created for this historic occasion by Simon Smith. Each of these beautiful drawings has been personally autographed by two more 506th PIR D-Day veterans and then conservation matted to include the original signatures of a further three veterans that jumped on D-Day with the famous Easy Company: