Home > Artists > Simon Smith > THE HELL THAT WAS BASTOGNE

THE HELL THAT WAS BASTOGNE 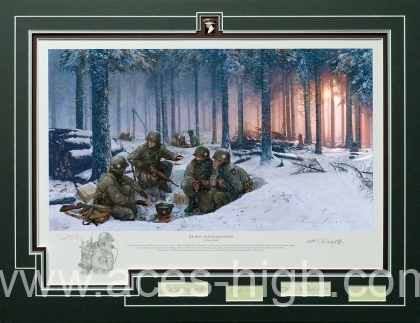 The end of 1944 was fast approaching and with the Allies surprised by the unexpected German assault through the Ardennes, it was down to the battle-fatigued soldiers of the US 101st Airborne Divisions to hold the line at Bastogne.

Christmas was drawing near and the Germans were in retreat. The advance of the Allied armies towards Hitler’s fortress Reich ground relentlessly on but Hitler had one final surprise in store. Outwitting their opponents through guile and stealth, on 16 December 1944, the Germans unexpectedly counter-attacked through the weakest part of the Allied front line – the heavily-wooded Ardennes.

Minutes after a massive 90-minute heavy artillery barrage, three Panzer Armies advanced through the swirling mists and snow-clad forests along a front 80 miles wide. The thinly-held Allied lines wilted under the pressure. Reinforcements were needed – and fast.

In Reims, 100 miles to the west, two battle-weary units had just arrived to re-group following Operation Market Garden – but the US 82nd and 101st Airborne Divisions never got the chance to rest: as news of the German breakthrough arrived, the 101st were soon heading towards the pivotal town of Bastogne that controlled the roads to the west. If Bastogne fell and the Panzers drove hard, they could split the Allied armies in two.

Simon’s dramatic piece depicts the exhausted men of ‘Easy’ Company, 506th PIR, 101st Airborne Division in their hastily dug fox-holes deep in the forests surrounding a now besieged Bastogne. Heavily outnumbered and lightly armed they are desperately short of ammunition and food. Equipped with inadequate winter clothing and unable to light fires for fear of giving away their positions, they are freezing but proudly defiant. Tasked to hold the perimeter, whatever the cost, the men of the 101st yielded not an inch, holding the enemy at bay for a week until relieved by elements of General Patton’s 3rd Army.

To honor those who fought during the bitter conflict at Bastonge, each print in this limited edition has been personally signed and authenticated by veterans who served with the US 101st Airborne Division as the Allies pushed for victory during WWII. By endorsing the edition, their autographs help to create a historically important collector’s piece to be cherished for future generations.

A special commemorative edition – each copy is completely unique!

Restricted to just 25 copies worldwide, each print has been autographed by a highly-regarded veteran who served with the famous 101st Airborne at Bastogne:

If that wasn’t already special enough, each print has been made completely unique with the inclusion of a specially-commissioned pencil Remarque in the lower border by the artist, Simon Smith.

With all components of the Limited Edition, these highly-restricted TEN signature pieces are additionally signed by a further five veterans who served with the US 101st Airborne Division, including some of the most legendary names to fight with the unit at Bastogne:

Using the most sophisticated digital Giclée technology, each Studio Proof is printed directly on to fine canvas creating a stunning piece which has all the look and feel of an original painting.