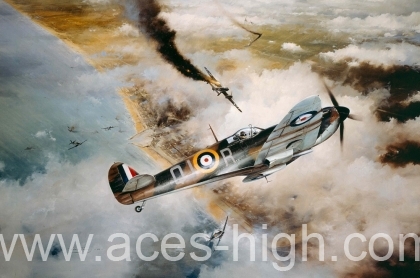 Few fighter pilots scored a victory on their first day in combat. Bob Stanford-Tuck managed to destroy no fewer than three enemy aircraft on his first engagement. Adding credit to this feat, the combat took place during the early part of WWII when most of the time the RAF pilots were heavily outnumbered.

Regarded by many to have been one of the most naturally talented fighter pilots, Bob Stanford-Tuck demonstrated exceptional skill immediately he started flying. He had complete mastery of his machine, be it Spitfire or Hurricane, and an uncanny skill in the art of tactics and deflection shooting in the heat of battle.

Fearless and effective in battle, no matter what the odds, Stanford-Tuck achieved a significant 29 aerial victories as early as 1942 when he was shot down by groundfire over Northern France.

Robert Taylor’s painting depicts Bob Stanford-Tuck destroying his third enemy of the day – an Me110 – over Dunkirk, and Bob’s own words when he saw the painting were :”The painting is so realistic. That is just how I remember the action.”

High over the French port of Dunkirk, Tuck’s 92 Squadron Spitfire is seen in vertical banking turn with the Me110 streaming smoke way below. Certainly one of the most dramatic aviation paintings depicting the action of the era, collectors will recognise the added value of this Fighter Ace’s signature.

Each print signed by Robert Taylor and the legendary man himself:

This limited edition print has been Mounted to full conservation standards to include a photo and museum-quality reproduction RAF wings. Ready to frame!