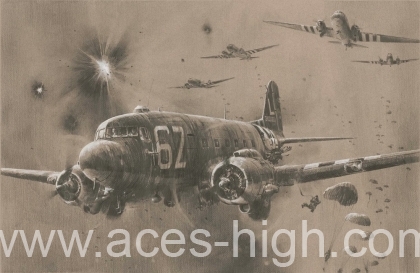 At 23.45 on the night of 5 June 1944, the 101st Airborne’s most legendary unit of combat paratroopers – the notorious ‘Filthy Thirteen’ – jumped into France near the village of Sainte Mère Église, in the final hours before the D-Day landings.

They were the Screaming Eagles’ most notorious unit, a small bunch of raw, tough, ruthless young men. Hard drinking and savage fighting - and that was only in training -with scant regard for authority. And if the reputation of this unique bunch of renegades within the ranks of the 101st was formidable, for the Germans it became one of sheer terror.

Superbly crafted in his unique blend of pencil and paint on tinted paper, Robert Taylor’s classic new Master Drawing captures the moment on the night of 5 June 1944 when the 101st Airborne’s legendary squad of elite paratroopers jump into battle in the vital hours before the D-Day landings commence. The pilots of the 440th Troop Carrier Group struggle to keep their Dakotas level as deadly flak pummels the formation.

Each print in every edition is personally signed by two of the original 'Filthy Thirteen', together with artist Robert Taylor.

The US Airborne Edition

These distinguished signatories have signed in tribute to all the men who fought in 1944 with the Airborne Divisions on D-Day and following the Normandy invasion.  Commemorating the US Airborne's Divisions, this TEN signature edition is additionally signed by the following veterans who served with the 82nd and 101st Airborne Divisions: