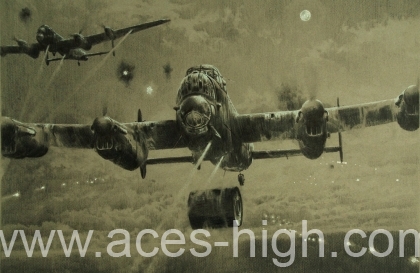 The ultra-secret operation to destroy the huge hydro-electric dams that powered a significant part of Germany’s industrial war machine in the Ruhr valley, codenamed Operation Chastise, had been planned in stealth for months.  Using a revolutionary 10-ton ‘bouncing bomb’ developed by the brilliant designer Barnes Wallis, a special squadron comprised of the most talented crews that RAF Bomber Command could muster would be formed to attack primarily the Möhne, Eder and Sorpe Dams.

Using highly modified Lancaster bombers to carry the secret bomb, Operation Chastise was to become one of the most dangerous precision bombing raids ever undertaken, and Robert Taylor astutely captures all the atmosphere in his drawing Bomb Away!, the latest addition to his highly acclaimed Graphite Collection.

At 00.38 hrs the attack on the Möhne Dam is already well underway. The commander of 617 Squadron and leader of the raid, Wing Commander Guy Gibson, had made the first successful attack, but the dam wall had held. And then tragedy had struck as Flight Lieutenant Hopgood’s Lancaster, hit by flak during his attack, had exploded in a ball of flame.

Gibson called in Flight Lieutenant Mick Martin to make the third assault and Robert Taylor captures this moment with graphic precision. As enemy flak and tracer illuminate the night sky, Guy Gibson boldly attempts to draw the enemy’s fire as Martin holds Lancaster AJ-P steady at 60ft above the waters of the Möhne Dam to release the cylindrical, bouncing bomb and send it spinning towards the dam wall. In a few moments a huge explosion will erupt up in to the night sky as the hydrostatic bomb detonates against the mighty granite walls. Once again, though, the Möhne dam held, but not for long.

Each print in every edition of BOMB AWAY is signed by SIX distinguished veterans who were part of Operation Chastise on the night of 16/17 May 1943:

The unique NINE signature piece includes all of the signatures of the Limited Edition, but have also been beautifully conservation matted to include the extra original signatures of two further Dambuster aircrew together with an instrumental figure in the success of the bouncing bomb:

This outstanding TWELVE signature edition has also been conservation matted with all the components of the Publishers Proofs. However, included in the matting are a pair of museum quality reproduction RAF Pilots wings and the historically important original signatures of three of the pilots who took part in this epic raid: