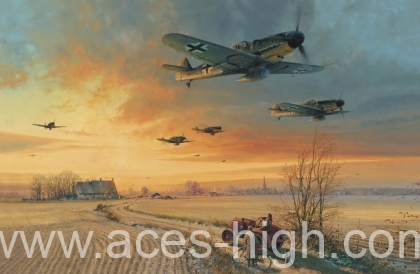 Robert Taylor’s stunning painting captures a group of Bf109Gs from III./JG26, as they return to base after a long range fighter sweep along the Channel coast in early 1944. In his unmistakable style, and with extraordinary skill, Robert evokes a moment of rare tranquillity amidst the carnage of war as the lengthening sun glints across the frozen landscape, during the short days of winter.

It was known as the Jagdverbände, the fighter arm of the Luftwaffe, and by June 1940 it boasted some of the world's greatest fighter pilots. With tactics honed to perfection, these battle-seasoned veterans dominated the skies of Europe.

But as the war progressed, the Luftwaffe fighter pilots faced another battle, the increasingly desperate war of attrition as the Allied air forces slowly, but inevitably, ground the German war machine into defeat. By early 1945 Allied air supremacy was overwhelming.

And yet despite overwhelming odds, from within their ranks came the most successful air Aces ever to fly in combat - names such as Hans-Joachim Marseille, the top-scoring fighter pilot in the West, the legendary Erich Rudorffer who scored more multiple victories than any other pilot and of course the Fighter General, Adolf Galland, who achieved all of his 104 victories in the West.

The prints in this new release are personally autographed by a truly outstanding collection of Luftwaffe fighter pilots who flew in those momentous air battles over Europe, including one of III./JG26’s most legendary commanders - General Walter Krupinski. Since endorsing the edition with his signature, the General has sadly passed away giving even greater meaning to this new release and providing enthusiasts with a remarkable and valuable future collectors piece.

The Long Short Days is Robert Taylor at his very best and one of the most exciting releases for some time. This is an unbelievable line up of signatures and in our opinion this will become a highly collectible and much sought after release.

Every print in each edition is individually hand-numbered and personally signed by the artist Robert Taylor together with TWO Luftwaffe fighter pilots who flew Me109's in the West:

The Collectors Edition and Remarques

These NINE signature editions have been personally signed by a further seven highly respected Luftwaffe fighter pilots who flew in combat over Germany and France, including Generalleutnant Walter Krupinski who signed the edition during his lifetime on the condition the prints would be released at a later date.

Each of these NINE signature prints will be enhanced with a distinctive and highly valuable original pencil drawing by Robert Taylor, hand drawn within the border and just TEN copies are issued with an exquisite DOUBLE sized pencil remarque. These are unique and highly prized pieces and this is a great opportunity to acquire an original work by the master of aviation art.

This TWENTY signature Tribute Edition, limited by the extreme rarity of many of these pilot’s signatures, contains all the components of the Collectors Editions but each print is accompanied by an ORIGINAL pencil drawing by the world’s premier aviation artist Robert Taylor. Each of these beautiful drawings is personally signed by five famous Aces and then conservation matted to include the original signatures of a further SIX outstanding and highly decorated fighter Aces including some of the leading Pilots of the Western Front. The signatories in this amazing and historic edition scored over 1600 victories between them: