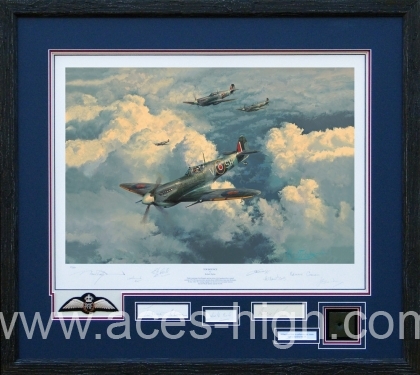 One of the first units to re-equip with new Mk.IX Spitfire was 64 Squadron, and this classic masterwork depicts the day when the RAF hit back against the Fw190s of the Luftwaffe. It was 30 July 1942 over Boulogne when 64 Squadron, acting as top cover, spotted a group of a dozen Fw190s about 2,000ft below them. Bouncing the enemy from above, Don Kingaby, one of the RAF’s most iconic fighter Aces and the only airman to be awarded three DFMs, advanced further into the record books by downing one of the Fw190s. It was the first victory for the new Mk.IX Spitfire which would also become the first Allied aircraft to shoot down an Me262 jet.

Our expert framing team have created a very special piece to act as a lasting tribute to all those who flew the mighty Spitfire!

This Collector's Edition print has been framed to include the original autographs of three of the most iconic WWII Spitfire pilots:

AVM 'JOHNNIE' JOHNSON CB CBE DSO** DFC* - the highest-scoring RAF Ace of WWII against the Luftwaffe with 38 victories which included 20 against the Fw190, more than any other RAF pilot.

Sqn Ldr NEVILLE DUKE DSO OBE DFC** AFC FRAeS - the highest-scoring Allied Ace in the Mediterranean Theatre, he finished the war with 27 victories and later became one of the world's foremost test pilots.

Sir ALEX HENSHAW MBE - as Chief Test Pilot for Vickers Armstrong it's estimated that he flew 10% of all Spitfires and Seafires produced and would also demonstrate the Spitfire to dignitaries such as Winston Churchill.

Also included is a unique fragment from a crashed WWII Mk.IX Spitfire!

The full list of signatures including these matted autographs is as follows: