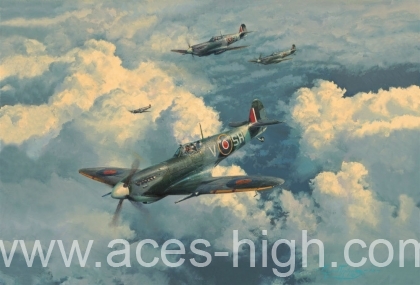 Released on the 100th Anniversary of the RAF as a tribute to all those who flew the Spitfire!

When the Luftwaffe unleashed the Fw190, the unsuspecting Spitfire pilots of RAF Fighter Command were at serious disadvantage – but it wasn’t for long!

Under clear skies, a light breeze from the south-west blew across the grass airstrip. It was Thursday 5 March 1936 and K5054 – the prototype of R. J. Mitchell’s beautiful Spitfire fighter – was about to make its maiden flight.

Vickers Chief Test Pilot ‘Mutt’ Summers climbed into the cockpit and fired up the new 12-cylinder, liquid-cooled Rolls-Royce Merlin engine which roared into life with an unmistakable and soon-to-be-familiar sound. It was just after 4.30pm when Summers fully opened the throttle and K5054 surged forward and took to the air, the shape of its thin aero-dynamic elliptical wings soon apparent to all on the ground below. One of the most perfect fighting machines of all time had been born, and not a moment too soon because the dark clouds of war were gathering over Europe and the Spitfire would be on the front line during the nation’s darkest hour – the Battle of Britain.

So perfect was Mitchell’s design that no fewer than 40 Spitfire variants were developed, more than any other British fighter in history and the only one to remain in production before, during and after the war. But there were obstacles along the way, none more so than in late 1941.

From the outset the Spitfire had duelled hard with its great adversary, the Luftwaffe’s Bf109 as each fought for air superiority. With the introduction of the Mk.V Spitfire the balance of power swung towards the RAF, but in late 1941 the Luftwaffe introduced a game-changer – the Fw190. It was faster, better armed and clearly superior to the Mk.Vs.

‘The Fw190 certainly gave the British a shock’ wrote Douglas Bader, and RAF Fighter Command was soon forced to scale back their sweeps over France whilst the engineers from Supermarine and Rolls-Royce raced to catch up. It took months, but by June 1942 the first of a new variant began arriving which, everyone hoped, was the answer to the Fw190 – the Mk.IX Spitfire.

One of the first units to re-equip was 64 Squadron, chosen by the world’s foremost aviation artist Robert Taylor for his classic masterwork, depicting the day when the Mk.IXs hit back. It was 30 July 1942 over Boulogne when 64 Squadron, acting as top cover, spotted a group of a dozen Fw190s about 2,000ft below them. Bouncing the enemy from above, Don Kingaby, one of the RAF’s most iconic fighter Aces and the only airman to be awarded three DFMs, advanced further into the record books by downing one of the Fw190s. It was the first victory for the new Mk.IX Spitfire which would also become the first Allied aircraft to shoot down an Me262 jet.

Released on the 100th Anniversary of the RAF as a tribute to all those who flew the Spitfire, the Military Gallery is honoured that RAF Pilots who flew this magnificent aircraft in combat during WWII have signed each print, giving great meaning to this historic release.

Each print in every edition is individually numbered and personally signed by the artist, together with two prominent pilots who flew Spitfires in Europe during WWII:

Each print in these editions has been additionally signed by a further four highly-distinguished pilots who flew Spitfires in combat over Europe during WWII:

Regarded as the world’s finest aviation artist, Robert Taylor’s original work is extremely limited so a hand-drawn pencil Remarque is one of the best ways to own a unique ‘one of a kind’ piece of his artwork.
Each print in the edition will have a delicately crafted original pencil drawing, skilfully created by Robert in the lower margin. Each Remarque drawing is different and unique and exclusively limited to just 15 copies worldwide.
The DOUBLE REMARQUES, restricted to just 10 copies worldwide, each of these print will be issued with a double size drawing, larger and crammed full of detail and content.

With the demand for Robert’s original work always high we urge collectors to place their remarque orders early to avoid any disappointment.