NIGHT ATTACK ON THE NEWCASTLE 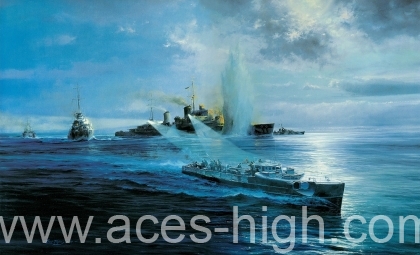 Striking out from their Libyan base, German E-boats were the scourge of Allied shipping in the Mediterranean. Their fast-moving, hit-and-run night attacks on vital convoys heading for the besieged island of Malta meant a perilous voyage not only for the merchant ships and tankers, but for the warships of the Royal Navy as well.

This dramatic piece by Robert Taylor portrays one such dramatic encounter that took place in the early hours of 15 June 1942. The German E-boat S-56 has managed to slip past two escorting Royal Navy destroyers to make a stealthy stern attack on the British cruiser HMS Newcastle but, suddenly alerted to the incoming attack, the Newcastle manages to catch the E-boat with its searchlight. The German commander quickly launches two torpedoes and, as one strikes the British cruiser, makes good his escape at high speed into the darkness. Though damaged, the Newcastle managed to limp back to Alexandria.

What makes this unusual piece especially collectible is that it was signed by no less than five sailors who served with HMS Newcastle, including the later Admiral of the Fleet, Sir Henry Leach who was Gunnery Officer on the Newcastle at the time. He later commanded destroyer Dunkirk, the carrier Albion and went on to become First Sea Lord and, in 1997, Chief of Naval Staff.