STING OF THE BLACK TULIP 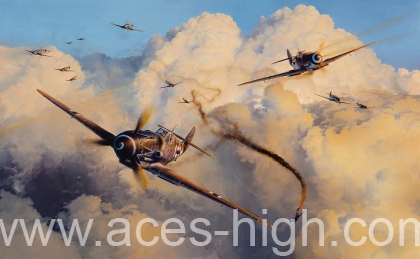 Released in 1997, this was the first in the now legendary ‘Hartmann Trilogy’. Unsurprisingly it sold out on the day of release and has remained in constant demand on the secondary market ever since.

Legend has it that the moment a Russian pilot saw the Bf109 with the distinctive Black Tulip painted on the nose, he would know who the pilot was and radio his colleagues with a warning that the world’s most-feared fighter Ace was on the warpath and their best chance of survival was to depart the scene quickly and without contest. That Ace was, of course, Erich Hartmann who, in just over 2½ years, scored 352 aerial victories to easily become the top-scoring Ace in history. It is a feat unlikely to be replicated.

Robert Taylor’s portrayal of this legendary Pilot depicts the 7 August 1943 as the Ace scores the first of seven victories in a day.

Joining artist Robert Taylor in signing every print in this edition is this legendary Luftwaffe Ace:

Every print in this superb edition is individually signed by Erich Hartmann and in paying tribute to the greatest Ace of them all, has also been signed by a glittering array of top-scoring Aces that include such legendary names as Adolf Dickfeld (136 victories), Peter Duttmann (152 victories), Walter Krupinski (197 victories), Gunther Rall (275 victories) and Walter Wolfrum (137 victories). Authenticating perhaps the most unique collection of Aces' signatures ever published, they amassed 1276 victories between them:

With all signatures of the 1200 Victory Edition, this truly amazing edition has been additionally signed by two highly sought-after JG-52 Aces Alfred Grislawski (133 victories) and Hartmann’s early mentor ‘Paule’ Rossmann (93 victories), giving this edition an unparalleled number of over 1,500 victories on a single edition. Simply astonishing: