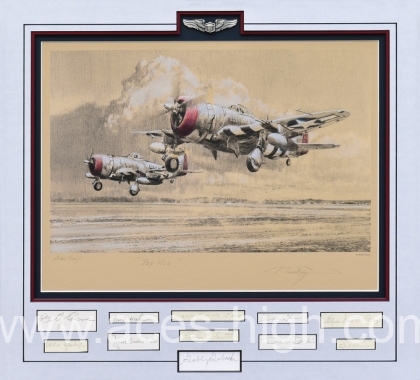 ‘Wait till you get ‘em in your sights’ he said, ‘then short bursts. There’s no use melting your guns!’ It was a simple tactic and with 28 air victories to his credit during World War II, one that made ‘Gabby’ Gabreski the top-scoring American Ace in Europe. As if that wasn’t enough, Gabreski would later down 6.5 MiG-15s flying the F-86 in Korea, one of only seven American fighter pilots to achieve Ace status in both wars.

The son of Polish immigrants, Francis S. ‘Gabby’ Gabreski had been one of the few American fighter pilots to get airborne during the infamous Japanese raid on Pearl Harbor on 7 December 1941. Then, although assigned to the 56th Fighter Group in England, his Polish background found him detached for a period to serve with 315 (Polish) Squadron RAF flying Spitfire Mk.IXs before re-joining ‘Hub’ Zemke and the 56th FG in February 1943. He would now go on to notch up an unbeatable tally of 28 air victories, plus another three destroyed on the ground.

Robert Taylor, still the world’s most collected and respected aviation artist, has chosen Gabreski as the centrepiece for his latest master drawing Top Ace. Bringing America’s top-scoring fighter pilot in Europe to life, you can feel the raw power of Gabreski’s rugged P-47 Thunderbolt as he and his wingman thunder away from Boxted shortly after D-Day. But by 20 July 1944 he’d completed 300 combat hours and was scheduled for a rest. Gabreski had other ideas and decided on one final mission. It turned out to be his last. On the way home from escorting bombers he spotted a Heinkel He-111 stationary at a Luftwaffe airfield and decided to strafe it. But he got too low; the propeller of his P-47 struck the ground. Forced to crash-land he evaded capture for five days but was eventually captured and taken prisoner of war.

In tribute to the legendary Ace depicted and the courageous pilots who flew with him in the ‘Wolfpack’ 56th Fighter Group, Robert’s stunning drawing has been faithfully reproduced as a high quality giclée fine art print on textured velvet paper. Only 26 copies of this are available worldwide through the Military Gallery, Robert’s exclusive publisher with every print signed, numbered and hand-titled by Robert himself.

The historical importance of this extremely limited edition is highlighted by the addition of rare ORIGINAL autographs within the conservation matting, including Gabby Gabreski and a further ten highly-regarded pilots who flew with the 56th FG. Between them they achieved over 100 victories to help make the 56th the USAAF’s top-scoring fighter group of the war: