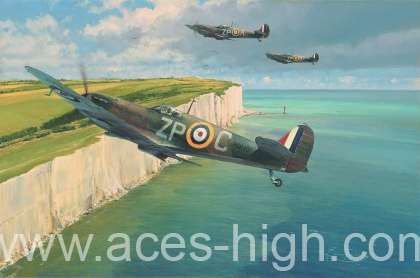 This royal throne of kings, this sceptred isle...this happy breed of men, this little world, this precious stone set in the silver sea, which serves it in the office of a wall or as a moat defensive to a house, against the envy of less happier lands…this blessed plot, this earth, this realm, this England.

For nearly a thousand years the white cliffs of southern England had taunted many a foreign army. These fortress walls of chalk, however, were defended by the moat-like waters of the Channel and together they had shielded the British from her enemies. Alongside Drake they had defied the armies of Spain and her great Armada and, in 1805, had halted the march of Napoleon’s Grande Armée. No enemy force since that of William the Conqueror in 1066 had successfully managed to cross the Channel in anger but, in May 1940, one of the most powerful armies the world had ever seen arrived at Calais. An invasion by Hitler’s all-conquering Wehrmacht was imminent – or so it seemed.

To cross the Channel and breach the English defences, the Luftwaffe simply had to gain control of the skies, and with massively superior numbers the outcome seemed inevitable. The fate of Britain lay in the hands of less than 3,000 young airmen from Fighter Command – Churchill’s ‘Few’.

By July the most famous air battle in history was underway and, over the next three months, under tranquil summer skies, the ‘Few’ battled to defend their Sceptred Isle. Impossibly outnumbered and flying daily to the point of exhaustion, by October these courageous young men had snatched victory and from the jaws of defeat, emerging defiantly victorious. The threat of invasion might be over but a terrible price had been paid – during that long battle for the survival of Britain 544 had been killed and 422 wounded; and of those who survived a further 814 would be killed before the end of the war.

It is to the valiant ‘Few’ that Robert Taylor once again pays tribute in this masterful painting portraying a fleeting moment of calm for the pilots of 74 (Tiger) Squadron during the height of the Battle of Britain. With his commanding officer Sailor Malan (ZP-A) to his right, Acting Flight Lieutenant John Freeborn (ZP-C) takes time to reflect on another day of intense combat while passing over the white cliffs and the familiar lighthouse at Beachy Head, as the squadron cross the English coast to head for home.

This stunning edition carries the original signatures of veterans that fought during the Battle of Britain, including John Freeborn who is featured in the piece. It is a poignant reminder that a number of these iconic men have sadly passed away since signing, giving enthusiasts the opportunity to add a piece of great historic significance to their collections.

Joining artist Robert Taylor, every print has been personally autographed by two highly regarded RAF veterans who flew in combat during the Battle of Britain:

Each print in these memorable FIVE signature editions is additionally signed by three prominent veterans who fought in the Battle of Britain:

With all the signatures of the Veterans Edition, each print will be enhanced with a unique and highly collectible ORIGINAL pencil remarque, hand drawn in the lower margin of the print, creating a sought after collector's piece.

Including an original pencil drawing and fifteen signatures!

With all the signatories of the Veterans Edition, each print is issued with an exquisite pencil drawing specially created for the occasion by Robert Taylor and individually signed by three Battle of Britain fighter pilots:

Each drawing is conservation matted to include the signatures of two legendary RAF Aces: