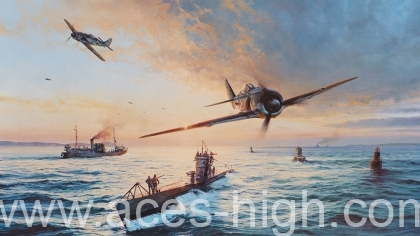 ‘The Homecoming’ remains one of Robert Taylor’s most dramatic and creative pieces, capturing, as it does, a moving scene in 1942. A small group of stubby-nosed Fw190s from III./JG2, en-route to their home base to the north-east of Brest, have caught sight of a small group of U-boats from the Kriegsmarine’s 9th Submarine Flotilla returning to port. As they are at the end of their coastal sweep, the JG2 pilots decide to welcome the U-boats home and give the submariners a suitable fly-past salute. For the tired crews this was a moving ‘homecoming’ to the U-boat crews after such an arduous spell out in the North Atlantic.

For collectors with an interest in U-boats, acquiring the original signatures of U-boat captains is a difficult one, especially of those with a Knight’s Cross to their name! With the average life expectancy of a U-boat crew member of just a few weeks, U-boat commanders who survived the war were a rarity, especially in 1999 when this beautiful piece was published.

The fact that three such men signed the edition published of this remarkable painting is just one of the reasons why the piece met with such great critical acclaim at the time. It is also why pristine copies are in so much demand today. First there was Siegfried Koitschka who first served under the legendary Erich Topp on U-552 before taking command himself. As captain of U-616 from 1942 to 1944 he undertook nine patrols lasting 204 days. Then there was Heinrich Schroeteler who commanded U-667 on four patrols into the North Atlantic and, at the end of the war, was captain of U-1023. And, finally, Helmut Witte, commander of U-159 who, on four patrols from 1941 to 1943, sank nearly 120,000 tons of Allied shipping.

And if these three commanders were not enough of an attraction, three top Fw190 Aces also signed the prints.