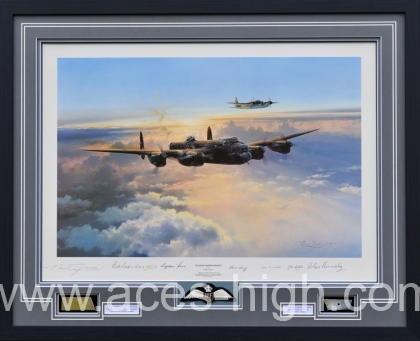 A Lancaster has been damaged and is left far behind the main force to make its own perilous way home as best it can. Seeing the vulnerability of their friends, a Mosquito crew expose themselves to the same dangers, and throttle back to stay alongside the injured warbird. Dawn has broken, the visibility is unlimited. They have yet to make that Channel crossing and enemy fighters are in the area. The crew of the Lancaster struggle to maintain flying speed and enough height to bring their large four-engined aircraft home. Perhaps tonight they will all drink and laugh in the local pub - perhaps!

We're rarely able to offer this print on the Secondary Market and it's easy to see why it proved so popular on release in 1989.

Creating a completely unique piece, our framing team have included two fully-authenticated fragments of aircraft within the mount - the first recovered from a Lancaster at the Victory Aircraft Factory, and the second recovered from a Mosquito crash site in Northern France.

It was personally signed at the time by SEVEN renowned WWII veterans who between them make up an entire Lancaster Crew with a combined 420 operational missions and a host of decorations: