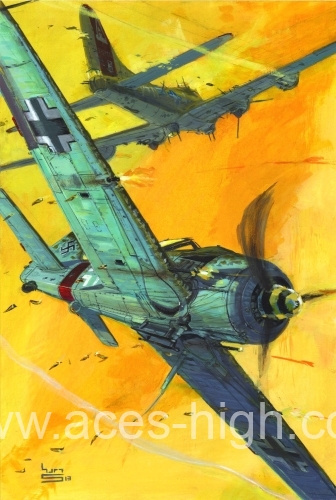 In a dramatic attempt to stem the tide of U.S. Eighth Air Force heavy bombers, a lone Fw190A-8 makes a daring but unsuccessful pass through a formation of B-17Gs from the 91st Bomb Group.

From the creation of the U.S. Eighth Air Force in 1942 until victory over Nazi Germany in May 1945 the heroics of its airmen are legendary. Eventually becoming the largest air group of the war, the ‘Mighty Eighth’ helped pound the enemy war machine to its knees and played a pivotal role in securing Allied success. The Luftwaffe tried its best to thwart the mighty armada of Eighth Air Force bombers but could never hope to match the growing numbers of American aircraft heading east from England to pound the Reich into ultimate submission. But, until the end, they tried, as portrayed in Keith’s spectacular painting as a lone Fw190 makes a desperate but unsuccessful diving pass through a formation of B-17Gs from the 91st Bomb Group.