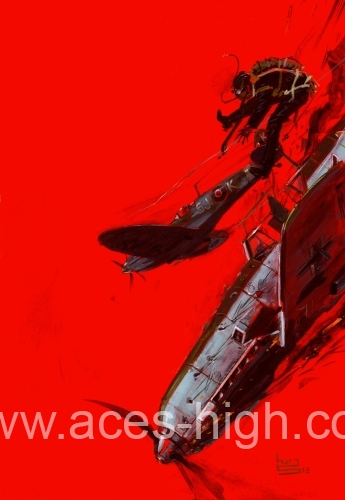 A Messerschmitt Bf109 pilot has no choice but to bale out of his stricken fighter following an encounter with Squadron Leader John Plagis of 126 Squadron in his Spitfire Mk.IX, August 1944.

The air superiority held by the Allies over the Channel and northern France during D-Day and the invasion of France was overwhelming. No longer did the Luftwaffe reign supreme as they once did; held at bay by RAF Fighter Command during the Battle of Britain they had since been decimated on the Eastern Front and relentlessly pummelled in the west. Those that remained, however, were still a deadly foe.

Keith’s dramatic painting takes us to an incident over occupied northern France during the hectic fighting in that summer of 1944 as Squadron Leader John Plagis, Commanding Officer of 126 Squadron and former Malta veteran, notches up yet another impressive victory, this time over a Messerschmitt Bf109.