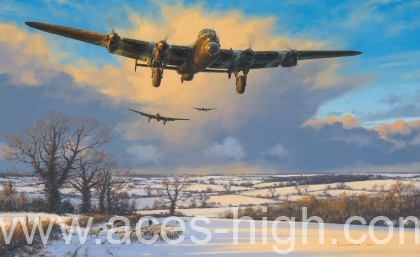 Of the 7,377 Lancasters built during the Second World War, it’s sobering to think that only a tiny handful managed to complete more than 100 missions. But it is perhaps not surprising given the average life expectancy of a new bomber joining an operational squadron was no more than a couple of months. The outlook for the crews was almost as bleak, Bomber Command casualty rates were appalling: 55,573 of 125,000 men who served were killed, 8,403 were wounded whilst another 9,838 were captured and taken prisoner. All things considered perhaps it’s no wonder that the 35 Lancasters to achieve the 100 mission target were considered ‘lucky’.

Designed by Avro’s chief designer Roy Chadwick, the mighty Lancaster entered service in 1942 and soon became the mainstay of Bomber Command, able to deliver a greater payload than any other bomber in World War Two and arguably the finest piston-engine bomber of its time. Crewed entirely by volunteers mainly from Britain and the Commonwealth, with the odds of survival stacked heavily against them, they endured the cruellest flying conditions imaginable.

In his breath-taking tribute to the Lancasters of Bomber Command and the crews who flew them, Anthony Saunders has chosen one of the 35 ‘ton-up’ Lancasters to take centre stage in his atmospheric piece The Work Horse. Using his considerable talent Anthony magically conjures up a glorious winter landscape just as it must have been on that cold, crisp, snow-clad morning of 5 January 1945 when Lancaster LM227 UL-I – call sign ‘I-Item’ of 576 Squadron once again made it safely home. Battle-scarred and with her paintwork showing the signs of a long, hard winter ‘I-Item’ descends gradually towards RAF Fiskerton. Now, with gear down on final approach, the weary pilot must concentrate hard as he steadies the bomber for touchdown. Behind them the rest of the squadron, some probably damaged with wounded on board, follow them home.

Adding great authenticity and in tribute to all those who flew in the bitter conflicts in the skies over Europe, each print is personally signed by WWII veterans who flew with 576 Squadron from RAF Fiskerton, as depicted in this moving piece, creating a unique collector’s edition.

Joining artist Anthony Saunders in signing every print are two highly-regarded aircrew who flew Lancasters with 576 Squadron during WWII:

Widely considered as some of the best and largest in the industry, Anthony’s unique pencil remarques are individually created in the lower margin of the print. The first edition, consisting of 15 single sized remarques similar in concept to the drawing depicted, are a perfect way for enthusiasts to collect original art. If you have any particular request, such as a specific aircraft or markings, please ask when placing your order and we’ll do our best to accommodate.

Created specially for the serious collector, the dramatic DOUBLE REMARQUES are much bigger than a standard remarque and exclusively restricted to just 10 copies worldwide. The demand for these superb creations is such that we urge collectors to reserve their remarques early to avoid disappointment.

The Giclée Proofs On Canvas

Using the most sophisticated digital technology, each Giclée Proof is printed directly on to fine canvas creating a stunning piece which has all the look and feel of an original painting. Fully authorised and signed by the artist, hand numbered and titled, each canvas proof is supplied pre-stretched ready to simply drop into a frame of your choice.