KING OF THE AIR 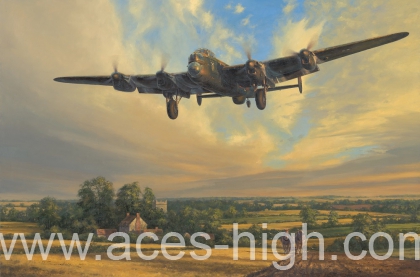 “Without your genius and efforts we could not have prevailed, for I believe that the Lancaster was the greatest single factor in winning the war.”
Marshal of the RAF Sir Arthur Harris, Commander in Chief of Bomber Command

The Avro Lancaster was undoubtedly the RAF’s greatest heavy bomber of World War II and, as the war progressed, formed the backbone of Bomber Command’s night offensive deep into the heart of the Hitler’s Reich. From its first operational sortie in early 1942 until the last of the 7,377 aircraft built was delivered in February 1946, the Lancaster’s outward appearance remained much the same – testament to its design, and to four brilliant Merlin engines.

Many of the most spectacular raids of the war, such as the breaching of the Möhne and Eder dams in May 1943, and the sinking of the German battleship Tirpitz in November 1944, were carried out by Lancasters. Ten Victoria Crosses were awarded to Lancaster crew and, by the end of the war in Europe, these mighty bombers had flown over 156,000 missions and dropped more than 608,000 tons of bombs, but at a huge cost: Aircrews faced some of the worst casualty rates of WWII and some 3,500 aircraft were lost on operations. Only a handful of Lancasters survived to complete more than 100 operations.

Lancaster JB663 King of the Air was one of those, symbolically chosen by Anthony Saunders as the subject for his stunning piece to accompany his first book. This resilient aircraft survived the war having flown 111 operations, and is seen here on the morning of 29 July 1944 as Flight Sergeant S H Jones of 106 Squadron brings her safely home to RAF Metheringham after a night-time mission to Stuttgart. With prints signed by two of the most highly-distinguished veterans ever to have served in Lancasters, including George 'Johnny Johnson' who also wrote the foreword, this release rightly earns its place amongst the memorable editions published by the Military Gallery.

Each portfolio includes an artist signed, numbered copy of the book Wings of War presented in a special slipcase and a matching-numbered, signed copy of the Limited Edition print King of the Air.

Every print in each edition is individually numbered and personally signed by the artist, together with two famous veterans who served on Lancasters during WWII:

There are few better ways to collect original art than by acquiring a pencil remarque and Anthony’s are considered to be amongst the best and largest in the industry.  Each drawing is unique and will be themed to Bomber Command and personal requests for drawings can be made at the time of ordering but with the growing demand for Anthony’s remarques we urge collectors to order early to avoid disappointment.

With the components of the Limited Edition, each portfolio is issued with an exclusive original pencil drawing by Anthony Saunders, commissioned specially for this release. The unique pencil drawing is personally signed by four veterans who served with great distinction in RAF Bomber Command:

Each drawing is conservation matted to include the original signatures of a further four highly distinguished Bomber Command Lancaster Pilots:

The Giclée Studio Proofs on Canvas

Using the very latest high-definition giclée technology Anthony’s fabulous painting is faithfully replicated onto fine canvas and is issued pre-stretched, ready to simply drop into the frame of your choice. Each numbered canvas is signed by the artist and issued with an individually numbered limited first edition copy of the book Wings of War, presented in its own luxury embossed slipcase.