THE MIGHTY EIGHTH PORTFOLIO A Welcome Return & Clash of Eagles 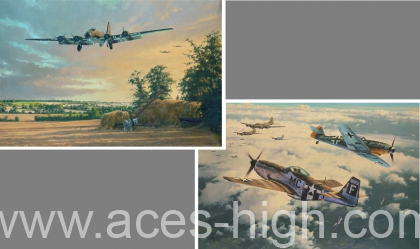 This superb pair of prints featuring the USAAF Mighty Eighth are available individually or as part of a matching-numbered pair.

As the late summer sun starts to set over the peaceful English countryside, the crew of ‘Ol Gappy’ nurse their battle scarred B-17G back to their base at Kimbolton. Close behind them, the remainder of the group make their final approaches after a gruelling mission to Meresburg on 11 September 1944. ’Ol Gappy’ survived to fly a total of 157 missions during the war, probably more than any other B-17 in the Mighty Eighth.

Every print in all of the editions has been hand numbered and personally signed by the artists as well as two highly respected B-17 pilots who flew with the 8th Air Force in Europe:

In the open skies high over occupied Europe, P-51 Mustangs of the 20th Fighter Group engage Me109s from JG77 in a furiously contested dogfight. Below them a formation of B-17’s from the 379th Bomb Group fly through the chaos, doggedly maintaining their course, as they head on to attack the huge synthetic oil refinery at Meresburg, southern Germany, 11 September 1944. So vital was this refinery to the Nazi war machine that it became one of the most heavily defended targets in Germany.

Each print in every edition has been hand numbered and personally signed by the artist as well as prominent USAAF and Luftwaffe veterans: