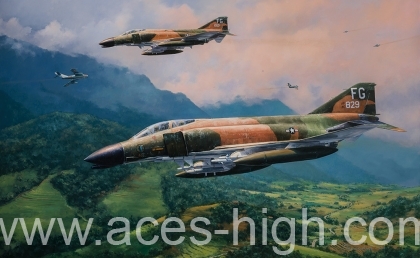 Part of a powerful pair of prints featuring the iconic McDonnell Douglas F-4 Phantom II which was used extensively by both the USAF and USN in Vietnam.

In September 1966 when the 44-year-old former WW2 fighter ace Colonel Robin Olds arrived to take command of USAF’s 8th Tactical Fighter Wing at Ubon, a Royal Thai Air Force base close to the border with Laos, the war in south-east Asia was escalating rapidly. There were now some 385,000 American forces stationed in Vietnam, plus another 60,000 sailors offshore and the numbers were increasing. But so were the casualties. Olds arrived at Ubon to find that many of the pilots in his new command were accomplished and experienced fliers, but morale was flagging – what they needed was some inspirational leadership. It only took Olds a few weeks to prove he was the best leader they’d ever had.

If he’d found some of his pilots dejected he found nothing wrong with their aircraft: the iconic McDonnell Douglas F4-C Phantom II, used extensively by both the USAF and USN in Vietnam and those belonging to Olds' 8th TFW would soon be involved in some of the biggest and most successful air battles of the war.

One such incident occurred on 20 May 1967 shortly after the moment depicted in Anthony Saunders’ outstanding Phantom painting MiG Encounter when Robin Olds and his flight of eight Phantom F-4s encounter a large group of North Vietnamese MiG-17s over the hills north of Hai Phong. During the clash that followed Olds and his WSO, 1st Lt. Stephen B. Croker, would destroy two MiG-17s. These were aerial victories three and four for Olds, making him the leading MiG killer in south-east Asia at that time.

By the time Robin Olds relinquished his command later that year, his 8th TFW, nicknamed the ‘Wolfpack’, had become the USAF’s top MiG-killing Wing in south-east Asia. He’d flown 152 combat missions during this time, scoring another four air victories to add to his World War 2 tally – now a ‘triple ace’ his final score was an impressive 17 victories.

MiG Encounter is just part of Anthony's portfolio, the second release titled The Sundowners is available individually as as a matching-numbered pair whilst stocks allow. Click HERE for info on The Sundowners or HERE for the pair.