LAUNCH AGAINST THE BISMARCK 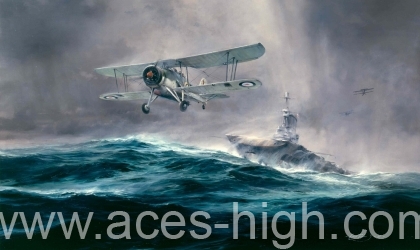 On the day that the Hood was blown apart, everyone was shocked, not least the German sailors on board Bismarck and Prinz Eugen. But for one man – Winston Churchill - it was more than shock, it was an outrage. He issued three brief, immortal words – ‘Sink the Bismarck!’

Within forty-eight hours the Bismarck was under attack, not from battleships, but by 15 lumbering, obsolete Fairy Swordfish bi-planes from the carrier HMS Ark Royal. After destroying the Hood with such ease surely there was nothing Bismarck could fear from these ancient ‘String-bags’. What the men of the Kriegsmarine hadn’t reckoned on was the guts and determination of the Fleet Air Arm crews flying the Swordfish. In atrocious weather conditions they had set out with a single torpedo apiece in a desperate attempt to halt the German battleship before it escaped. It was touch and go as the ‘String-bags’ launched their attack into the murderous barrage of fire thrown up by the Bismarck. One torpedo was all it took. Hitting the steering gear, the explosion damaged Bismarck’s rudder; it was jammed at 12 degrees and Bismarck was going in an erratic circle. She could run, but she couldn’t hide. As Prinz Eugen fled the scene the Bismarck was left to her fate as the Home Fleet closed in for the kill. Within hours she was battered into a burning hulk and sunk. The painting shows the Swordfish, in deteriorating weather, launching from the heaving deck of the Ark Royal. The canvas now hangs on permanent display in the Fleet Air Arm Museum as a fitting tribute to the aviators who took part in that attack against the Bismarck, four of whom signed the prints.

To illustrate the strength of character these men possessed, it’s worth pointing out when the prints were signed at RNAS Yeovilton, one of their number, then aged 80 and still with a pilot’s licence, flew his own single-seat light aircraft all the way from Scotland to Yeovilton, met his old comrades, signed the prints and returned solo the same way!