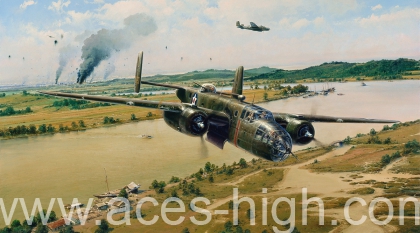 At 8.20am on April 18, 1942, just four months after the Japanese attack on Pearl Harbor, a small force of B-25 Mitchell bombers under the command of Col Jimmy Doolittle, undertook one of the most remarkable air raids of World War II. The Raiders’ orders were anything but simple: fly low level some 800 miles over water into Japanese territory without escort, attack targets in Tokyo and nearby, then, with insufficient fuel to return, fly towards China until they ran out of fuel, bail out and, finally, try to evade capture.

Every man knew the danger and Robert Taylor’s celebrated painting sets the scene as the Raiders leave the target area. The pilot drops lower to hug the landscape and opens the throttles as they head west. With luck the next stop is China!

Of the sixteen crews who took part in the Tokyo raid, eleven would bail out, three ditched off shore and two crash-landed. Most of the men would eventually return to freedom, but not all. Of the seven who never returned, three were killed in action, three were executed and one died in captivity having been taken Prisoners of War by the Japanese.

To commemorate the 75th Anniversary of the Doolittle Raid on Tokyo, this great Masterwork painting is now added to Robert's series of Giclée Studio Proofs on canvas.

USING THE LATEST DIGITAL TECHNOLOGY UNDER THE DIRECT SUPERVISION OF THE ARTIST,  THIS NEW CANVAS IS FAITHFUL TO ROBERT'S ORIGINAL PAINTING, CREATING A HISTORIC COMMEMORATIVE EDITION.

Each canvas is personally signed by Robert Taylor, individually numbered and supplied pre-stretched ready to drop into any frame of your choice