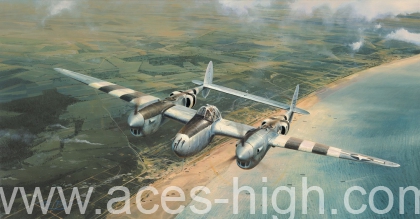 By any military standards, it was difficult to imagine the Supreme Commander of the largest air force of the time, piloting himself over the battlefront during the opening hours of one of history’s greatest military operations. But Jimmy Doolittle was no ordinary commander.

Hero of the famous 1942 raid on Tokyo, Jimmy Doolittle always led from the front. By 6 June 1944 he was in command of the US 8th Air Force and wanted to see for himself how the battle was going. And that’s exactly what he did. Piloting a P-38 across the beaches for two hours he returned to base, racing over to General Eisenhower’s headquarters to provide the first report the Supreme Allied Commander received, beating his own intelligence channels by several hours.

Each print in Robert Taylor’s evocative limited edition, commemorating the 60th Anniversary of D-Day, is signed by no less than FIVE top P-38 fighter pilots who flew combat during the Allied Invasion of Europe 1944 - 1945:

Each Artist Proof and Remarque copy of ‘Doolittle’s D-Day’ is additionally signed by one of the most famous Aces of World War II: