Home > Artists > Robert Taylor > INTO THE TEETH OF THE WIND

INTO THE TEETH OF THE WIND 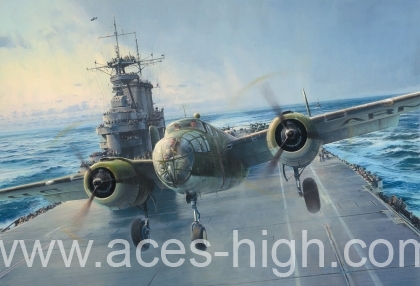 It was a simple plan with a single objective, yet impossibly difficult and fraught with danger at every step. Within four short months of the infamous attack on Pearl Harbor, the USS Hornet would sail to within range of the Japanese coast and launch sixteen heavily-laden B-25 bombers, never previously flown off the deck of a carrier, to make a daring strike against major Japanese cities. With each aircraft weighed down by a ton of bombs and fuel to fly 2400 miles, take-off would be marginal; landing a twin engine bomber back on the short deck, impossible. The crews would have to fly on towards China and make the best they could of survival.

At 8:00am on the morning of 18 April, 1942 Admiral Halsey flashed a message to Hornet to launch aircraft; the klaxon aboard ship boomed "Army pilots, man your planes!" In worsening weather, and with montainous waves spending spray over the bow, Hornet's deck was a hive of activity as the crews ran to their aircraft. By 8:20, with engines warmed and magnetos checked, mission leader Lieutenant Colonel Jimmy Doolittle gave the thumbs-up to the deck launching officer. Releasing brakes, he pushed the throttle levers to the stops, and gunned his heavy bomber towards the heaving bow of the ship, timing his run to coincide with maximum pitch of the deck. The B-25 became airborne with feet to spare.

Robert Taylor has created a wonderfully faithful recreation of the scene as Jimmy Doolittle lifts his heavily laden B-25 off the deck. Fifteen gallant crews, with engines turning, are lined up and ready to follow. These gallant "Doolittle Tokyo Raiders" struck the first blow to the very heart of the Japanese Empire, putting fear into the minds of the nation's eaders, causing the Japanese to divert aircraft and equipment from offensive operations to the defence of their homeland.

Each print in this edition is accompanied by an exclusive pencil companion print 'The Day Now Dawns. The two are signed by a total of TWELVE Doolittle Raiders:

Each special set includes both Commemorative edition prints accompanied by an ORIGINAL pencil drawing by Robert Taylor. Each drawing is conservation matted to include the original signatures of FOUR further Doolittle Raiders and GENERAL JIMMY DOOLITTLE making a total of SEVENTEEN signatures!