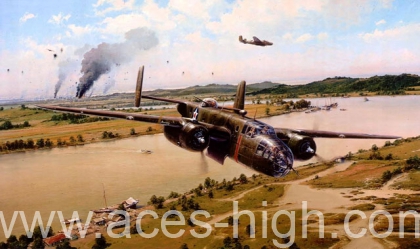 The Doolittle Raiders take their B-25 bombers down to very low level and head for China after delivering their surprise attack on the industrial and military targets in and around Tokyo on April 18, 1942. The sixteen-ship mission, led by volunteer crews, successfully completed one of the most audacious air raids of World War II. Personally signed by Doolittle Raiders.

The edition is signed by FOURTEEN surviving Doolittle Raiders aircrew.