THE BATTLE FOR BRITAIN 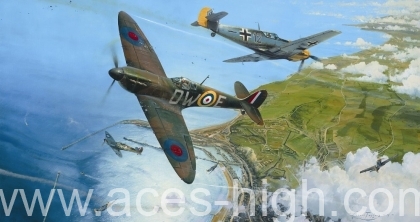 A Battle of Britain Spitfire from 610 Squadron takes on a Me109 from I./JG3 in a head-on attack high over the south coast port of Dover, in the late morning of 10 July 1940.

With the Battle of Britain in its early stages, a convoy of slow-moving cargo ships heading along the south coast came under attack from a formidable force of Dornier Do17 bombers, escorted by five squadrons of fighters. RAF Fighter Command scrambled several squadrons to meet the oncoming force in an effort to protect the ships, and a massive dogfight involving more than a hundred planes developed in the region of Dover.

The RAF fighters attacked head-on, ripping through the oncoming bombers. The ferocious battle raged well into the afternoon, and by evening the insurgents had been driven back to their bases in France to lick their wounds.

This memorable piece commemorating the Battle of Britain has been signed by up to FIFTEEN veterans who took part. The famous names are a mixture of both RAF and Luftwaffe veterans who flew during the battle.

Joining Robert Taylor, each print has been hand-signed by the following Battle of Britain pilots:

Each print in this edition has been additionally signed by:

The Battle of Britain Proof

Each copy in this exclusive edition has been signed by a total of FIFTEEN aircrew who flew during the battle. These do not include Group Captain TOM DALTON-MORGAN (listed above) who, due to illness, was unable to complete the edition: