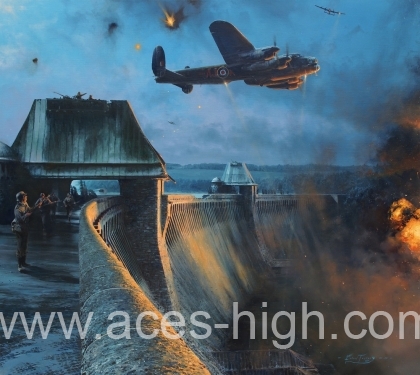 On the night of 16/17 May 1943 an elite force of nineteen Lancaster bombers undertook what was to become one of the most daring and ingenious air raids in history. Flying from RAF Scampton, their mission – code named Operation Chastise - was to breach the mighty hydroelectric dams of the Ruhr, the Möhne, Eder and Sorpe – a task which Arthur Harris had earlier described as impossible But cracking open the mighty dams would require exceptional flying skills; and so, on 21 March 1943, a new squadron was formed specifically for the task, the only time this ever happened in Bomber Command.

Known as 617 Squadron and led by Wing Commander Guy Gibson, it was not only the squadron that was unique, so was the weapon they would be using – Upkeep – a cylindrical, hydrostatic ‘bouncing’ bomb. The brainchild of Barnes Wallis, Upkeep was designed to skip across the surface of the water, sink against the dam’s massive wall, and explode with enormous force at a precise depth.

In Robert Taylor’s sensational painting, Guy Gibson and Mick Martin draw the enemy’s fire as ‘Dinghy’ Young clears the parapet of the Möhne dam seconds after releasing his bomb. A few moments later Young’s bomb will successfully detonate against the dam leaving it mortally wounded allowing David Maltby in AJ-J to finish the task. With the Möhne Dam breached Gibson, with the remaining crews, will turn south to repeat the operation at the Eder Dam.

Planned and created some years ago the prints were personally signed by all of the Dambusters veterans that were alive at that time in preparation for the 70th Anniversary. Sadly some have since passed away giving even greater meaning to this historic edition, allowing collectors a rare opportunity to acquire a new release carrying such iconic signatures:

Along with the artist Robert Taylor, every print in each edition is personally signed by the following THREE veterans of the Dambuster Raid:

Each print in these FIVE signature editions are also signed by:

With all the components and signatures of the Collectors Edition, the exclusive Tribute edition is issued with a unique ORIGINAL Masterwork pencil drawing beautifully crafted for the occasion by Robert Taylor, and PERSONALLY signed by three famous Dambuster aircrew.

Each drawing is beautifully matted to conservation standards to include museum quality reproduction Aircrew Europe Medal and RAF Wings together with the original pencil signatures of a further five iconic Dambusters, including the only American to fly on the Raid: