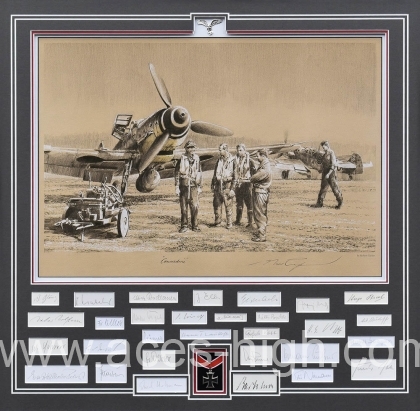 It is believed that over 2,500 Luftwaffe fighter pilots became Aces during World War II – these are men credited with shooting down five or more enemy aircraft in aerial combat. Over a hundred pilots claimed more than a hundred victories, and only two men scored more than three hundred – Erich Hartmann, the top scoring pilot in history with 352 victories, and Gerhard Barkhorn with 301. The third on the list of highest scorers with 275 victories is Günther Rall who, but for injury, might have surpassed them all.

All three men flew most of their missions with the Luftwaffe’s most successful wing – Jagdgeschwader 52 – the unit chosen by artist Robert Taylor to represent all of the Luftwaffe’s fighter Aces in his master drawing titled Camaraderie.

In the thick of the fighting during the Battle of Britain in 1940, JG52 took part in the German conquest of Crete and defence of the vital Romanian oilfields before transferring to the southern sector of the Russian Front; and it was here that their legendary success was to blossom. By the end of the war its pilots had notched up a staggering total of over 10,000 victories during campaigns in which 67 pilots were awarded the Knight’s Cross or higher decorations. Their top ten highest-scoring fighter pilots achieved an astonishing 3285 victories between them.

Several of Luftwaffe’s leading Aces forged long-standing friendships with artist Robert Taylor over the years, none more so than the late Günther Rall. It comes as little surprise, therefore, that Robert has chosen to portray Günther as the lead character in this detailed piece, with the great Ace discussing tactics with his men before leading them out on an early morning patrol from one of many temporary airstrips in central Ukraine. It’s October 1943, during the period from July 1943 to April 1944 that Günther was Gruppenkommandeur of III./JG52, leading them in the great air battles with the Soviet Air force over the rapidly contracting German frontline.

In perhaps the most significant Luftwaffe release ever released from Robert's publishers, every print in this highly- restricted edition is hand signed and personally titled by artist Robert Taylor and issued matted to full conservation standards to include the original autographs of an astonishing THIRTY Luftwaffe fighter Aces who between them amassed 3285 victories. It’s of great historical importance that this long list of highly- regarded veterans includes perhaps the three most famous names of them all – the three highest scoring Aces in the history of aerial combat; Erich Hartmann, Gerhard Barkhorn and Günther Rall.

Only TWENTY FIVE copies of this memorable edition are available worldwide and to complete each portfolio, every composition is issued by a matching-numbered copy of the book ‘The Messerschmitt Bf109 in Air Combat Paintings by Robert Taylor’ produced exclusively for the release and beautifully illustrated from the archives of the Military Gallery using a selection of memorable Robert Taylor pieces featuring this legendary aircraft.

Each highly-restricted portfolio contains a copy of the specially produced book, along with a matching-numbered copy or the print ‘Camaraderie’ which has been matted to include the original autographs of THIRTY Luftwaffe Aces: