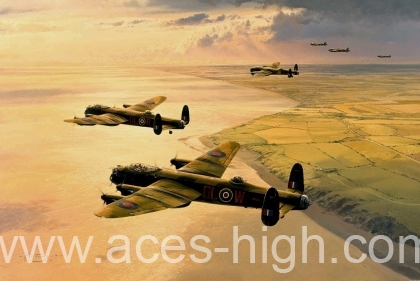 North of Berlin on the Baltic coast at Peenemunde lay the secret experimental base for one of Hitler’s most dangerous secret weapons – the V-2 rocket. On the night of 17 August 1943, in one of the most successful raids of the war, Bomber Command flattened it.

Robert Taylor’s evocative painting, originally commissioned to commemorate the operation, portrays Lancasters of No. 83 Squadron Pathfinder Force as they climb out over the east coast of England en-route for Peenemunde on that warm summer evening. Brilliantly executed in his unrivalled style, Robert has lit the sky with the bright golden rays of the setting sun, tantilisingly refleced in the peaceful calm waters of the North Sea.

The ‘Master Bomber’s’ aircraft, seen here in the forefront of the painting, made nine dangerous passes over the target, directing operations. During the next 55 minutes Hitler’s secret weapon establishment was almost totally destroyed by the bomber crews that followed his directions.

Commemorating the 50th Anniversary of the mighty Lancaster bomber, its vital role in World War II, and the gallant crews that flew them. Each print is signed by FIVE famous men of RAF Bomber Command, together with artist Robert Taylor.