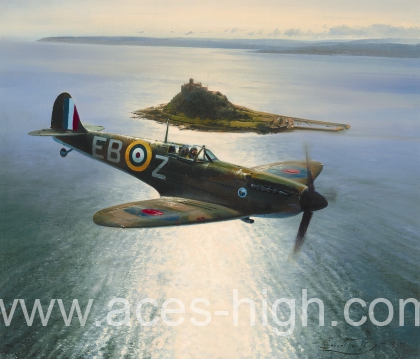 One of the RAF’s oldest squadrons, No 41 was active with its Mk I Spitfires at the outset of World War II, first seeing action off the England’s east coast in December 1939.

Based at Hornchurch in May 1940, the Squadron was involved in the heavy fighting over the beaches at Dunkirk and, as spring turned to summer, its pilots were soon repelling the mass attacks mounted on Britain by the Luftwaffe – on 15th August 41 Squadron’s small contingent of serviceable Spitfires intercepted 90 plus enemy aircraft. It was a typical day in the life of a front line squadron during the decisive contest that was the Battle of Britain. No 41 Squadron flew Spitfires throughout World War II, being equipped with the Mk XIV at the end of hostilities.

Robert has chosen to show a Spitfire in the Battle of Britain colours of No 41 Squadron for his romantic portrayal of a Spitfire over St Michael’s Mount, just off the coast of Cornwall – where the southwest corner of the British Isles meets the mighty Atlantic. This famous and historic landmark dating back to the Iron Age is steeped in folklore and legend. The castle of St Michael’s Mount, perched atop a great granite rock that rises majestically out of the sea in Mount’s Bay, for centuries made a tempting site for fighting forces. Here Robert cleverly uses this historic fort to provide a symbolic backdrop to a wonderful study of one of the most beautiful aircraft ever built.

Every print in the Spitfire Commemorative Edition has been signed by THREE outstanding fighter pilots who flew the Spitfire in combat during World War II.

This unique SIX signature Anniversary Edition from the world’s premier aviation artist is a rare chance for collectors to secure a truly special item of Spitfire history. Carrying the additional original signatures of three of the most celebrated Spitfire fighter pilots of World War II, each of the 45 copies available are supplied in conservation double mattes.