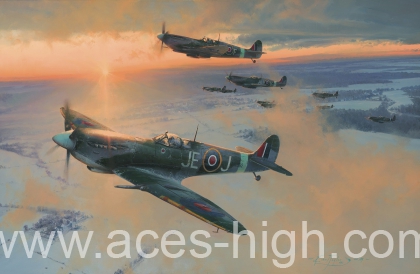 Top scoring RAF Ace Johnnie Johnson, Commanding Officer of 127 Wing, leads the Mk.IX Spitfires of 421 Squadron RCAF out on patrol from the airfield at Evère near Brussels, close to the German front line. As the Canadians climb steadily out, the golden light of dawn reveals a snow-clad landscape firmly held in the icy grip of winter, December 1944.

Perhaps the greatest pilot to ever fly the Spitfire was the RAF’s top fighter Ace and Wing Leader ‘Johnnie’ Johnson. His resolute determination and steadfast leadership came into its own during D-Day and the subsequent advance through Normandy, and he would finish the war as the highest scoring Allied Ace in Europe with 38 victories.

Robert Taylor’s Masterwork has been specially commissioned in tribute to Johnnie Johnson and to commemorate the heroic role played by the pilots who flew the Spitfire on D-Day and the great Allied push from Normandy.

In special agreement with the Military Gallery, Johnnie Johnson fully endorsed the content of this painting by adding his signature to the edition during his lifetime, on condition that prints would be released at a later date.

Every print has been personally autographed by artist Robert Taylor and by FIVE prominent Pilots that flew the Spitfire during D-Day and Normandy, including the RAF’s top fighter Ace ‘JOHNNIE’ JOHNSON.

In addition to the signatures on the Limited Edition, each print in this EIGHT signature edition is also signed by three top Canadian Spitfire Aces who flew with Johnnie Johnson in the Canadian Wing:

With all the signatures of the Canadian Edition, each print in this stunning FIFTEEN SIGNATURE Tribute Edition is issued with a highly collectible original pencil drawing by Robert Taylor, individually created on buff paper in graphite with coloured highlights. Each drawing is personally signed by highly regarded D-Day Spitfire Pilot, Ray Stebbings, and matted to conservation standards to include the original signatures of six highly decorated Aces that flew with Johnnie Johnson’s Canadian Wings over D-Day and Normandy: