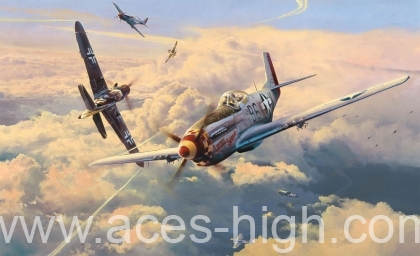 High over the Rhineland, this dramatic clash between P-51s of the Mighty Eighth and a strong force of Bf109s took place in January 1945.

Despite their failed attempt to seize the initiative during the Battle of the Bulge, by January 1945 it was obvious to all but the diehard Nazis that Germany would lose the war, and day after day, night after night, the Allied air forces had pounded the enemy war machine. It was a relentless assault yet, undeterred by the lack of fuel, supplies and experienced pilots, the Luftwaffe doggedly fought on. If the Allies had air superiority, nobody had told the determined pilots of the Luftwaffe, because in January 1945 the skies over Germany were both dangerous and deadly.

Robert Taylor’s iconic image Struggle for Supremacy takes us back to one of the intense air battles of that time.  Set against a majestic Robert Taylor skyscape, P-51 Mustangs from the 357th Fighter Group had been escorting heavy bombers when they spotted a large formation of enemy Bf109s. The painting depicts Captain Robert Foy of the 363rd Fighter Squadron as he takes on one of the enemy fighters in a daring head-on pass; below, P-47s of the 56th Fighter Group climb to join the fray and give much-needed support.

This stunning painting has joined the ranks of the most celebrated images in Robert’s extensive portfolio, and we are delighted to announce that it is the latest addition to his hugely popular series of Giclée Proofs on canvas. Thanks to the latest-generation, high-definition Giclée technology, it is now possible to replicate Robert Taylor’s original oil painting on to canvas, creating a stunning collectors piece, to be cherished by future generations.