MUSTANGS ON THE PROWL 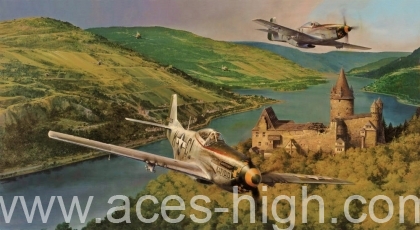 Between 3 and 13 September 1944, the 55th Fighter Group flew eight arduous, highly successful, bomber escort missions to Germany for which the group received a Distinguished Unit Citation. Like those the group had flown before, and would fly again and again until the end of hostilities, each mission took them deep into enemy airspace, involved desperate combat with Luftwaffe fighters, and culminated in rapid descent to low level to strafe enemy airfields on the way home. In that ten day period of intense fighting the 55th covered themselves in glory, destroying large numbers of enemy fighters in the air and on the ground, one of their pilots becoming the top-scoring ground attack pilot of the campaign.

Long-range combat missions were typical of the assignments flown by the fighters of the 8th Air Force during that period of the air war. Not content with dog-fighting at altitude, when escort duty was complete, the Eighth's aggressive fighter pilots relished the opportunity to hurtle down to tree-top height and, ignoring the inevitable barrage of anti-aircraft fire, shoot up any target of opportunity upon which they could bring their guns to bear.

Robert Taylor's spectacular limited edition print, the third in his acclaimed Collector Portfolio commemorating the great Air Commands of World War II, depicts the king of the Eighth's ground attack Aces, Colonel Elwyn Righetti. Flying his P-51D Mustang, the 55th's CO of 338 Squadron, already with 20 plus victories to his credit, leads his pilots through the Rhine Gorge, skimming the ancient Castle of Stableck standing above Bacharach, as they seek out enemy targets on their way back to base at Wormingford, England, in the spring of 1945. A classic Robert Taylor edition endorsed with the signatures of Aces who flew and fought the legendary P-51 Mustang in the greatest air war in history.

Every print in the 'Aces Edition' is signed by THREE P-51 Aces who flew with the 55th Fighter Group in Europe during World War II, together with the artist Robert Taylor.

In addition to everything in the Mighty Eighth Edition, each General Proof Edition print is also issued with a matching numbered and signed pencil drawing print, DOOLITTLE OVER THE BEACHES, which is matted to include the original pencil signature of: