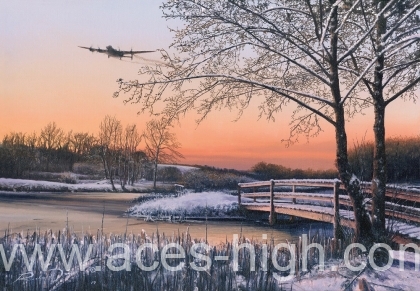 A TRIBUTE TO THE AIRMEN OF RAF BOMBER COMMAND

It’s been hours since the main force returned safely to base but one ground crew is still scanning the eastern horizon for the sound of Merlin engines, knowing their aircraft is long overdue and missing. The tension amongst them is almost as high as it’s been on board the missing Lancaster as it limps back alone across the cold North Sea.

Badly damaged by flak over Germany that has left two engines overheating, the crippled bomber, down on power and hard to handle, has fallen further and further behind the main formation. They soon find themselves alone. With no co-pilot to relieve him, the exhausted Lancaster pilot has called on help from his flight engineer and between them they have somehow coaxed the battered aircraft onwards.  With the snow-clad landscape of England once more beginning to appear beneath them, they have finally made it home.

Richard’s inspired piece sees the straggler with just a few more miles to go before the pilot gets his Lancaster safely back on the ground and, after her ground crew have worked their magic, the bomber will soon be in the air again, ready to fight another day. Adding great provenance to this poignant and atmospheric release, the prints are personally autographed by distinguished World War Two veterans who flew with RAF Bomber Command, creating a unique and exclusive collector’s piece.

Regarded as one of the most gifted exponents of pencil work in the industry, Richard will hand-craft an original drawing in the lower margin of these prints. If you have any particular request, such as specific aircraft markings, please ask when placing your order and we’ll do our best to accommodate.

Created with the serious collector in mind, and restricted to only TEN copies worldwide, each print is further enhanced with a unique, individually created double-size pencil drawing, once again finished in the graphite and paint combination that has gained Richard such outstanding international acclaim.