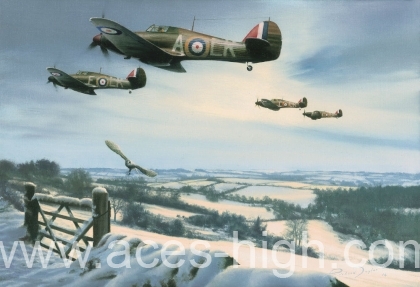 A TRIBUTE TO THE HAWKER HURRICANE

Designed by Sydney Camm in the early 1930s, the Hurricane was the RAF’s first fighter capable of flying at over 300mph. Compared to Mitchell’s radical new Spitfire the Hurricane was built using the traditional methods that underpinned the high regard pilots had for Hawker aircraft. It would soon prove to be one of the most rugged fighters in the history of combat aviation.

Following the outbreak of war Hurricanes fought with distinction in the Battle of France. During the Battle of Britain it was responsible for shooting down more enemy aircraft than its famous counterpart, the Spitfire and from the beginning of July until the end of October 1940, four-fifths of all enemy aircraft destroyed fell victim to the guns of a Hurricane. This hugely versatile aircraft fought throughout the whole of WWII including northern Europe and the Mediterranean to North Africa and the Far East.

Richard Taylor’s superb painting Winter Combat hints at the bitter fighting that lies ahead. A few months ago they had been fighting for their lives during the Battle of Britain but for now the snow-clad tranquillity of an English winter brings a brief, but welcome, relief for the Mk.1 Hurricane pilots of 87 Squadron.

Joining artist Richard Taylor in creating this new tribute to the Hurricane, each print is signed by three highly respected Pilots who flew this wonderful aircraft in combat during World War II:

PLEASE NOTE THAT WE CAN SUPPLY MATCHING-NUMBERED PAIRS WITH THE MASTERWORK PENCIL DRAWING WHILE STOCKS LAST!