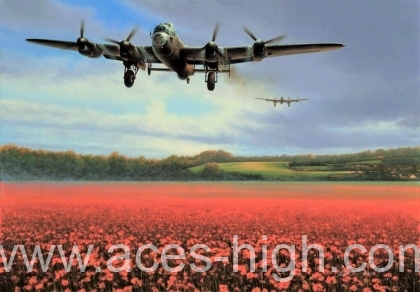 A TRIBUTE TO THE AIRMEN OF RAF BOMBER COMMAND

The men who served so bravely in Bomber Command came not only from Britain but from all over the free world. Their unswerving courage, devotion to duty and the extraordinary contribution they made between 1939 and 1945 was beyond measure. In fact, without RAF Bomber Command there would have been no final victory in Europe.

It was a heroic yet often deadly role – of the 125,000 men who served in Bomber Command, 55,573 made the ultimate sacrifice – a casualty figure only surpassed by those who served in the Kriegsmarine’s U-boats.

And the aircraft that many of these airmen flew from 1942 onwards was the legendary Avro Lancaster, known as the backbone of Bomber Command. It was probably the greatest heavy bomber of World War II and Sir Arthur Harris, Commander in Chief of RAF Bomber Command, believed that the Lancaster, powered by its four mighty Merlin engines, was ‘the greatest single factor in winning the war’. “Without your genius and efforts” he wrote of the Lancaster crews, “we could not have prevailed”.

It is therefore fitting that Richard Taylor has chosen the Lancaster in his moving limited edition, to represent all those who served with Bomber Command during World War II. Depicted are the aircraft of 106 Squadron whose motto Pro Libertate – ‘For Freedom’ – not only gives title to the painting, but perhaps symbolises the driving force behind so many of these brave young men who faced such daunting odds.

With gear down, the Lancasters are on final approach to their Lincolnshire airfield after yet another perilous night-time mission over northern France during the summer of 1944. The bombers’ crews are, as ever, exhausted yet thankful to have survived and their spirits are lifted by the sight below. As the morning mist clears an expanse of glorious red poppies joyfully heralds their return, and welcomes another summer’s day – and another day of freedom.

Each print in every edition has been personally signed by the artist along with three highly-regarded RAF Bomber Command veterans:

For Freedom is the second in a series commemorating the Allied forces during World War II. The first – Fields of Glory – was dedicated to RAF Fighter Command and signed by three highly-distinguished Battle of Britain veterans. This new edition is likely to be just as sought after and available in matching numbers while stocks last.