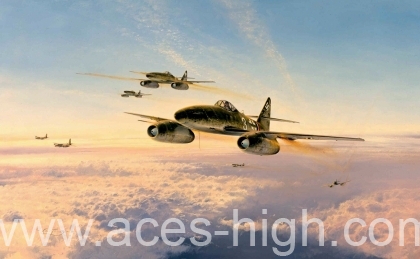 Adolf Galland and a group of his JV-44 Wing Me262s as they make a high-speed rocket assault on a formation of B-26 Marauders.  Diving from a 6000 ft. height advantage to 1500 ft. below and behind the bomber formation, the 262s made a fast approach, climbing to the level of the bombers before loosing off their 24 R4M rockets in one salvo at 600 yards; a long burst of cannon fire followed at 150 yards, and a quick climbing exit from the scene.

Galland's Me262 is captured by Robert Taylor at the moment of release of his rocket salvo, the burst of flame and smoke visible under each wing as the deadly missiles are launched.  Above, a second 262 pilot launches his rockets while a third lines up his sights on the B-26s ahead.  Below two more swoopinto the attack, one closing on the straggling Marauders on the left of the picture.

In his inimitable style, Robert Taylor sets the scene at 20,000 feet over Southern Germany on a late afternoon in April 1945, the drama unfolding over a typical cloudscape which has become the hallmark of the world's most collected aviation artist.

Conferring great significance to Robert Taylor's first edition in his Protagonists Series, three famous high-scoring Luftwaffe Aces, all of whom flew the Me262 in combat, have joined the artist in signing each print in the edition: