EAGLES OF THE WEST 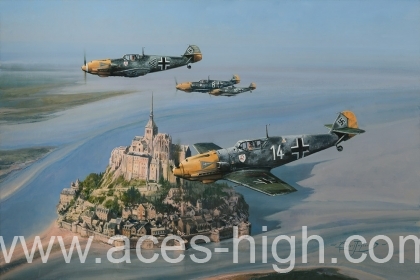 The Battle of Britain, fought between 10 July and 31 October 1940, will be remembered as one of the most important battles ever fought, a moment of such importance in British history that it ranks comfortably alongside those of Agincourt and Waterloo. It was a titanic struggle that, all agreed, pitted the best pilots in the world against each other and with such famous names as Douglas Bader and Adolf Galland, Bob Stanford-Tuck, Peter Townsend and Werner Mölders involved you not only had to be good to survive, but lucky.

As part of his long legacy in portraying scenes from the Battle of Britain, Robert Taylor, who personally knew and was friends with many of the leading protagonists involved, has created this beautiful work titled Eagles of the West. As if to confirm his reputation as the world’s leading aviation artist, on this occasion Robert features the Luftwaffe’s leading Battle of Britain Ace – Helmut Wick. Recently promoted Gruppenkommandeur of I./JG2 ‘Richthofen’, Wick is seen leading a group of Bf109s back to their base in Normandy following a sweep over the English Channel and Normandy coast during the closing stages of the battle.

Providing a fitting backdrop to Wick and his Bf109s is the magical island of Mont-Saint-Michel, the most famous landmark on the French coast, whose ancient abbey, built by the Normans many centuries before, has witnessed many invading armies come and go. Now radiant in the early evening sunlight in a style that only Robert can capture, the abbey’s soaring gravity-defying walls will, in time, once again witness the passing of the current conflict and those, like Wick, whose time was fleeting. Following a further promotion to Major not long after and appointed Geschwaderkommodore of JG2 – the youngest Luftwaffe officer to hold such a position – Wick’s luck ran out. On 28 November 1940, a few weeks after the battle had ended, he was shot down and killed in an encounter with Spitfires near the Isle of Wight.

Complementing Robert’s work and adding great historic interest for collectors, every print in the edition carries the original signatures of some of the most famous Luftwaffe Aces who fought in the Battle of Britain. This is likely to be a landmark edition from the world’s most collected aviation artist with a line-up of signatories that will never be repeated. Although sadly no longer with us, their names remain a powerful reminder of the mighty force that went into battle with the best of Fighter Command.

Every print is individually numbered and personally signed by the artist, together with three highly-regarded Luftwaffe Aces who flew during the battle:

Additionally signed by a further two famous Luftwaffe pilots, all five of the signatories on these historic editions reached Ace status before the end of the war, together clocking up many thousands of flying hours in combat and between them amassed over 535 victories:

Including an ORIGINAL PENCIL DRAWING and THIRTEEN signatures!

With all components of the Collector’s Edition, each print in this highly-restricted version is issued with an exquisite original pencil drawing, specially created for the occasion by Robert Taylor, which is signed by five famous Luftwaffe fighter pilots, alongside this it is conservation matted to include museum-quality reproduction miniature Knight’s Cross and Luftwaffe cap eagle, along with the original autographs of a further three famous Luftwaffe Aces including the legendary pilot depicted in Eagles of the West:

Each of these stunning works of art is then conservation matted to include museum-quality reproduction miniature Knight’s Cross and Luftwaffe cap eagle, along with the original autographs of a further three famous Luftwaffe Aces including the legendary pilot depicted in Eagles of the West:

For the first time ever, we’re delighted to offer ground-breaking Legacy Remarques on a new release. Robert’s talented son, Richard Taylor, will create a specially hand-drawn Remarque in the lower border of the print.

These are available to be ordered in ‘Double’ and ‘Quad’ sizes.

CLICK HERE for more info and prices about The Legacy Remarques.